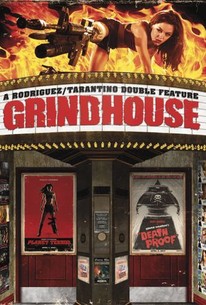 Kill Bill director Quentin Tarantino and Sin City director Robert Rodriguez join forces to offer a cinematic tribute to the blood-soaked exploitation epics of yesteryear with this hyper-violent coupling of two full-length features punctuated by a collection of outrageous trailers. The first segment, directed by Rodriguez and entitled Planet Terror, details the violent struggle between a ravenous army of zombie-like humanoids who have taken control of the planet and the remaining survivors who refuse to go down without a fight. Freddy Rodriguez, Naveen Andrews, and Rose McGowan headline a cast that also includes Marley Shelton, Michael Biehn, Josh Brolin, Bruce Willis, and Tom Savini. In Death Proof -- director Tarantino's take on such peddle-to-the-metal shockers as White Line Fever -- Kurt Russell stars as an engine-revving psychopath who prefers to take out his beautiful victims at 200 mph. With a list of potential roadkill candidates that includes Rose McGowan, Jordan Ladd, Rosario Dawson, and Vanessa Ferlito, Death Proof takes viewers on an adrenaline-infused drive that's as sexy as it is shocking. Its tantalizing title borrowed from the term frequently used to describe the seedy, 1970s-era inner-city movie theaters that screened excessive, low-budget independent films containing copious amounts of violence and nudity as a means of offering counter-programming to the decidedly more restrained big-budget studio films, Grindhouse takes its love for these unabashedly sleazy efforts one step further by offering a jaw-dropping collection of fake exploitation trailers from such directors as Rob Zombie, Eli Roth, and Edgar Wright. ~ Jason Buchanan, Rovi

Quentin Tarantino
as Rapist No.1

Electra Avellan
as Babysitter Twin No. 1

Elise Avellan
as Babysitter Twin No. 2

Greg Kelly
as Rapist No. 2

Cecilia Conti
as Paramedic No. 1

Tommy Nix
as Paramedic No. 2

Troy Robinson
as Soldier No. 1

Derek Southers
as Soldier No. 2

Will Arnett
as Announcer
View All

Grindhouse is both impressive and disappointing. From a technical and craft point of view it is first-rate; from its standing in the canon of the two directors, it is minor.

A rowdy jolt of quasi-nostalgic escapism.

RR and QT do an excellent job of simulating the content of grindhouse offerings, but they don't simulate the experience or the giddy kick.

The one thing that became evident to me, while watching Tarantino's homage to sewer cinema, is that even while the flesh is melting and being blown apart with bullets, if the spirit is missing, there simply isn't much point.

Not just a movie but an event in its own right, Grindhouse is simply unmissable in its complete form.

A paean to the exploitation films of the 70s, built more for titillation than story-telling, Grindhouse - especially the Rodriguez sequence - is nearly impossibly silly, not necessarily a bad thing, and is certainly not for everyone.

Grindhouse is a great experience, packed with fun, thrills, chills and gore galore.

Delivers all the trashy, seat-squirming, eye-covering moments your fiercely racing heart craves. Forget about "guilty pleasures." Call it a pleasure, and leave it at that.

Loved the movie as a whole; the blend of Rodriguez and Tarantino go hand in hand with each other. It really doesn't seem like it's longer than 3 hours at all....it goes by in a flash. The acting was good, both plots were original, and the killing/blood scenes were on point as usual with Tarantino. This movie is different from anything you've probably seen before, and it uses that freshness to its advantage.