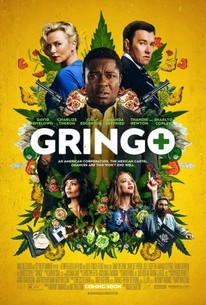 Critics Consensus: Gringo rounds up a bafflingly overqualified cast for a misfire of a comedy that's fatally undermined by its messy plot, poorly conceived characters, and obvious debts to better films.

Critics Consensus: Gringo rounds up a bafflingly overqualified cast for a misfire of a comedy that's fatally undermined by its messy plot, poorly conceived characters, and obvious debts to better films.

Critic Consensus: Gringo rounds up a bafflingly overqualified cast for a misfire of a comedy that's fatally undermined by its messy plot, poorly conceived characters, and obvious debts to better films.

Combining dark comedy with dramatic intrigue, Gringo joyrides across the border into Mexico, where all is not as it seems for mild-mannered American businessman Harold Soyinka (David Oyelowo). Crossing the line from citizen to criminal, Harold tangles with duplicitous business partners, Mexican drug lords, international mercenaries, and the DEA. As he attempts to survive in one of the most dangerous places on earth, the question lingers: is this ordinary man in way over his head, or is he two steps ahead? Directed by Nash Edgerton, who made his feature length directorial debut with the acclaimed Australian thriller The Square, Gringo also stars Joel Edgerton, Amanda Seyfried, Charlize Theron, Yul Vazquez, Thandie Newton, and Sharlto Copley. Financed by Amazon Studios, the film is written by Anthony Tambakis and Matthew Stone, and produced by Rebecca Yeldham, Nash Edgerton, Beth Kono, A.J. Dix, Charlize Theron and Anthony Tambakis.

Box Office: Black Panther Smashes $1 Billion with 4th Weekend at #1
A Wrinkle in Time Lacks Magic
Rate Yourself with the Cast and Director of Gringo

Despite corralling Charlize Theron, Joel Edgerton, Thandie Newton and David Oyelowo into its incredible cast, Gringo is, at best, an inept attempt at a dark comedy.

Life may be full of coincidences, but screenplays cannot be.

A movie created by someone who has ever actually been to Mexico and thought to pay attention to more than kidnapping scares and cartel nightmares.

It's hard to begrudge them the fun they're having on the screen.

Though all of Gringo's elements don't ultimately come together seamlessly enough for this to be a "great" movie, not all movies have to be great. Some of them just have to be a fun, funny, escapist two hours. This cast delivers.

Oyelowo steals this movie right from under everyone else's collective nose. He's a hoot in an act of grand larceny that makes the uneven Gringo worthwhile.

Feels old fashioned, like it has been sitting around on a shelf somewhere, hidden from view since the 1990s.

Opts for satisfaction more often than its contemporary buddy-cop and action-comedy counterparts, which further aids the outcome.

It seems at times unclear as to whom the film wants to side with given its tone, blandly exploiting people's misfortunes instead of using a satirical bent.

Gringo gets a lot of mileage out of its energy, its ability to use cruelty as a motivational tool rather than just as a way of belittling others, and its copious amounts of creative violence.

A very good direction, an inspired cast and a self-conscious and exaggerated microcosm that will delight all those who need a good dose of cynicism. [Full Review in Spanish]

Call me crazy, but I really enjoyed myself. The many plot elements and characters may not necessarily be as fleshed out as well as they could be, but they serve their necessary purpose to entertaining effect. And yeah, the "weed pill" is more a catalyst for the action as a whole rather than a topic of discussion, but the dark ensemble comedy pitch works and as a result I dug way more of this than I didn't. -Oyelowo raps an entire verse of "Gettin' Jiggy Wit It" and nails it -Theron does Mavis Gary, but from a different angle and steals every scene in which she appears. -It (literally) took me two whole minutes to realize that was Paris Jackson -Sharlto Copley is a South African treasure and should be utilized far more than he has been since 2009. -"That's like paying a $1,000 for a Whopper Jr." Not a whopper, but a whopper jr.. I'm right there with ya. I'll give this another go to see if I can catch what so many are complaining about, but I hope it's the other way around and people come to appreciate this eventually. Unfortunately, those who've already seen this will likely never happen across it again.

Like a Mad Magazine story about the greed of capitalists gone mad this has it's moments. The story concerns one middle manager type (David Oyelowo) who discovers in the course of living his life that everyone he knows is into some sort of money hustle and is dissing him behind his back because he isn't. And so he decides to get in on the action. Joel Edgerton and Cherlize Theron are great as backstabbing lovers, and the action moves along briskly enough. I had some fun with this.