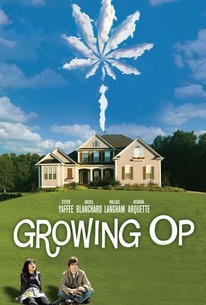 The home-schooled son of loving, marijuana-growing hippies discovers the twisted values of the suburban status quo in this comedy featuring Rosanna Arquette and Rachel Blanchard. Quinn Dawson (Staven Yaffee) may be your average teenager, though his parents are far from your typical, white-picket fence homemakers. They've recently relocated to the suburbs, where sheltered Quinn meets the girl of his dreams. Trouble is, the object of Quinn's obsession has enrolled in the local high school, where she's sure to fall for the star football player - or anyone else whose parents aren't committed criminals. Later, as Quinn begins to embrace his own independence and explore the world his parents so despise, he comes to realize they may be the sanest people in the entire town.

Jason Daley
as Ryan
View All

Growing Op strains hard to deliver edgy humour with a dollop of heart but is too stilted and derivative to carry it off.

Growing Op has bad writing -- predictable and one-dimensional -- but after about 90 minutes, the story starts taking surprise turns that don't make a lot of sense.

I've always enjoyed coming-of-age stories, and this fits the bill - although the family unit in this movie is more unusual than most. They develop marijuana. So how does a home school teenager fit in when he falls in love with the girl-next-door?

I went into this movie not expecting much but I came out very satisfied. It's not really a stoner movie like Dazed & Confused or Harold & Kumar but I think stoners will definitively love it. It's about this kid with parents who are very anti-establishment and leftist. They're family business is selling pot. The film follows their son, who was home-schooled all his life, trying to find his way in public high school to chase a girl he loves. Also, the ending is quite interesting. I would have been happy with the film half way through but the last 25 minutes made it even better. Very good for a low-budget film. Fap Rating: 3.5/10 Overall: 8.8/10

[28th Atlantic Film Festival] An intriguing twist on the pothead genre - Quinn (Steven Yaffee) is a sober, caring, inquisitive child who longs for a normal, suburban existence. The catch, is that his family runs a marijuana operation in their household. This is a very fresh take on the traditional coming-of-age story. The film does eventually take a twist, but the end result is still an incredibly high quality tale about family and independence. There are multiple story threads and moral occurring simultaneously; which are all wrapped up nicely by the end. I simply loved the last 10 minutes! I cannot say enough nice things about the script. I must mention Wallace Langham's performance as the anti-establishment father to Quinn, which was one of the most entertaining and likable aspects of the film.