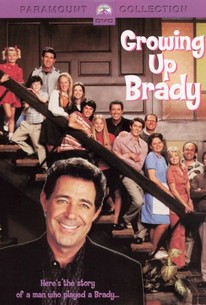 Did Greg and Marcia really do the nasty? Was Brady dad Robert Reed a bumbling lush? These and other burning Brady questions are in turn answered and skirted around in Growing up Brady, an account of the torrid machinations at work behind the laughter and polyester lapels of America's 1970s alpha-clan. Maureen McCormick (Kaley Cuoco) uses pouty sexuality to try to lure her TV brother, Barry Williams (Adam Brody) into her amorous clutches, while Florence Henderson (Rebecca Bush) feels more than motherly instincts toward her TV son. Meanwhile, poor Robert Reed (Daniel Hugh Kelly) drinks a lot, and everyone revels in a Brady Bunch of dysfunction. Growing up Brady was co-executive produced by none other than Greg Brady himself, Barry Williams.

Suanne Spoke
as Ann B. Davis

Michael Tucker (I)
as Sherwood Schwartz

Sherwood Schwartz
as Himself

Critic Reviews for Growing Up Brady

What's instructive about Growing Up Brady is that, even on television, all families are unhappy in their own way, proving Tolstoy's point.

Audience Reviews for Growing Up Brady

Enjoyable. Not perfect, but it is a TV movie, and for what it is, no complaints. Some of the cast are not great matches physically, but I think they mostly pull it off. I watched the show a lot growing up and this answered a few questions about their personal lives and a few antidotes about being on the set. It starts off a little dull, but as the kids get older it becomes more interesting.