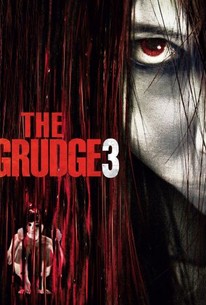 The ghosts of Kayako and Toshio return to spread terror as the Grudge saga continues in this sequel featuring Saw star Shawnee Smith. Jake (Matthew Knight) may have survived the previous supernatural onslaught, though the sheer terror of his harrowing ordeal has rendered him nearly insane. Hospitalized, Jake is haunted by visions of his ghostly attackers as his caretaker Dr. Sullivan (Smith) sets out to investigate his incredible tales. In the midst of exploring Jake's Chicago home, Dr. Sullivan discovers that Kayako and Toshio have targeted a new family. Should Dr. Sullivan fail in convincing a mysterious Japanese woman to help in banishing the vengeful spirits, everyone involved faces a fate worse than death.

Jadie-Rose Hobson
as Rose
View All

News & Interviews for The Grudge 3

View All The Grudge 3 News

Critic Reviews for The Grudge 3

Watched on its own, "The Grudge 3" is a disappointment; viewed after a better horror film - such as "Saw VI," also released in 2009 - and it teaches valuable lessons.

The Grudge 3 isn't perfect, and sometimes the film feels like it's trying a little too hard to emulate Shimizu's work. Ultimately though, the 3rd act left me feeling like the series had finally come to a satisfying resolution.

Perhaps the most perplexing cinematic mystery of the new millenium is why and how Ghosthouse Productions managed to run their Grudge franchise into the depths of the direct-to-video abyss so quickly.

Audience Reviews for The Grudge 3

Passable sequel that picks up right after the previous film. The first two films milked the most out of the story and scares so this one had little surprising to offer. Not scary at all really, has the odd creepy moment and some cheap "Boo" scares but it was getting a bit repetitive. The opening kill was a little disturbing and there's a couple of bloodier moments towards the end. It was ok overall but it's the weakest of the Grudge films, both American and Japanese ones.

I had my doubts about this one after reading so many bad reviews, so quite honestly, it could only be an improvement on what I was imagining. I found this not that bad at all. Okay, it's not particularly scary, but nor were the previous two, let's be serious here! The original Japanese ones, I think, were genuinely scary, but the remakes have always been more kitschy as far as I'm concerned. The no name cast are decent, particularly Matthew Knight in his brief appearance, and if you take it for what it is, it is enjoyable enough to watch.

An ok 3rd installment, although straight to DVD release. Lower budget but the production is pretty good, but it's just not as creepy as the first two. The boy that appears at times was weird in the first two in this it looks like an older actor was used. The same goes for Kayako, in the first two she was very strange and creepy in this she just looks very white? For those who really liked the first two films.

In the Grudge 2 - the Japanese Grudge curse stowed away to America. The direct-to-video Grudge 3 takes place in the same Chicago apartment building, which gets a bit boring. A few effectively spooky things happen with toys in the hallway and the dead "Toshio" Japanese boy from previous Grudges; now played by a different actor. There are not enough scenes of the spooky meowing drowned kitty cat ghost and too many scenes with the mommy ghost "Kayako". Some of the deaths are bloody, but nothing gore-tastic. It's cool to see Shawnee Smith (from Saw series) and Marina Sirtis (from Star Trek: TNG) playing roles; watch the movie for them alone. I found it hard to believe when (spoiler) Kayako's sister happens to move into the building to stop the curse. The cleansing ritual was silly. I miss the original Tokyo Grudge house. We don't really need more sequels to this tired tale, do we?