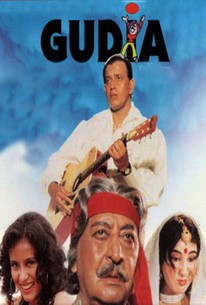 Ostensibly the slightly fantastical story of a ventriloquist's dummy who comes to life, but in reality Bengali director Goutam Ghose's first Hindi language full-length film is a metaphor for the increasing encroachment of political agendas in Indian films. It is also a remembrance of the recent horrific communal riots that afflicted Bombay. Hamid runs a wandering vaudeville troupe. He and his dummy Urvashi, whose name refers to the seductress and deathless child-woman, are the stars of the show until Hamid is diagnosed with throat cancer. He then passes all his knowledge of belly talking to his assistant Johnny. With the help of his sweetheart Rosemary, Johnny and Urvashi become a big hit, but as time passes Rosemary begins to get frustrated, for Johnny finds himself increasingly drawn into long conversations with Urvashi, who seems to have developed her own wisdom. His popularity on stage attracts the attention of local government officials who try to force Johnny to politicize his act. At this time, communal riots erupt and in the midst of the pressure and unrest, Johnny is unable to provide a voice for Urvashi. When in the midst of the violence Urvashi is destroyed, a real woman appears to take her place. ~ Sandra Brennan, Rovi

This quietly subversive Indian drama in Bollywood garb, adapted from a novel by the Bengali writer Mahashweta Devi, does well by its central metaphor.

The writer-cinematographer-composer has fashioned an interesting but prolonged and unsophisticated pic that builds slowly to a contrived ending.

There are no featured reviews for Gudia at this time.