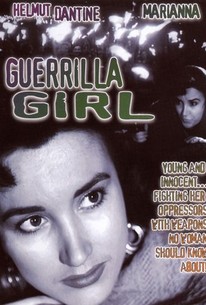 In this political drama set during WW II, a Greek officer abandons his fiancee and his duties when the German's take-over Athens. During his flight, he has a passionate war-time affair with a beautiful gypsy. Following the war, he returns. Time passes and he becomes an official until Communist revolutionaries take over and place him on an execution list. The gypsy girl has since joined the revolutionary movement. She sees her ex-lover's name on the secret list and heads off to warn him. Unfortunately, they are caught and shot for treason.

Sidney Paul
as Narrator
View All

There are no critic reviews yet for Guerrilla Girl. Keep checking Rotten Tomatoes for updates!

There are no featured reviews for Guerrilla Girl at this time.