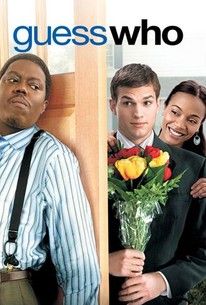 Critics Consensus: Despite the chemistry of its stars, Guess Who, a loose remake of Guess Who's Coming to Dinner, lacks the political relevance of the original.

Critics Consensus: Despite the chemistry of its stars, Guess Who, a loose remake of Guess Who's Coming to Dinner, lacks the political relevance of the original.

Critic Consensus: Despite the chemistry of its stars, Guess Who, a loose remake of Guess Who's Coming to Dinner, lacks the political relevance of the original.

A man gets a very big surprise when he meets his prospective son-in-law in this comedy. Percy Jones (Bernie Mac) is the understandably proud father of Theresa (Zoe Saldana), a beautiful and intelligent young woman living in New York City. When Percy learns that his daughter is dating someone and things are getting serious, he decides to do some research, and learns that her beau is a solid businessman. Percy arranges to meet the young man, but is a bit taken aback when he comes face to face with Simon Green (Ashton Kutcher) -- Percy and his wife are African-American, and Simon is very, but very Caucasian. When it becomes clear that Simon and Theresa's relationship is likely altar-bound, Percy finds himself suddenly full of misgivings about the young man, especially since Simon tends to get rather clumsy when he's nervous. Guess Who was loosely adapted from the 1967 hit Guess Who's Coming to Dinner, though the race of the prospective father and son have been swapped, and the original film's comic undercurrent has been pushed to the forefront. ~ Mark Deming, Rovi

News & Interviews for Guess Who

View All Guess Who News

Critic Reviews for Guess Who

The laughs are few and far between.

Mac and Kutcher have proved themselves better comics than actors, but both give charming, subtle performances here.

Besides, in our watered-down age of looking at complex social issues on a purely surface level, a studio willing to put out a feature with the required teeth to make it even remotely worthwhile is beyond minute.

The film is predictable and its humor is tension free.

In 1967, the answer was an unqualified yes, and in 2005, the answer is still, an only slightly less qualified, yes.

Here's a comedy premised on racial unease, and it's too timid to uncork actual racial humor.

A bland rom-com that seems afraid of its own subject matter.

A rule: any time you see the movie's stars racing in go-karts, it's because the script ran out of funny things to do.

In the first place, the film doesn't aim high enough. In the second place, it falls short of that unambitious goal.

Audience Reviews for Guess Who

Offensive, to some audiences, Guess Who is an unfunny modern view of Guess Who's Coming to Dinner.

This is a loose remake of Guess Who's Coming to Dinner with a race reversal, but it seems to have far more in common with Meet the Parents (with a racial twist). Unlike the 1967 film, this bypass serious drama and instead goes for the path of farce. In a way, this film really doesn't have a lot of impact. In 1967, interracial relationships were a far more touchy subject. Now they really aren't that big of a deal. Also, by going for the farce route, there's not really a lot of substance here. There are a couple of really good scenes that go in that direction, but this is mostly just a racial comey of mistrust and misunderstanding. This kind of thing has been done before as well, and also better. This is still mildly passable and decent entertainment though. I laughed a handful of times, enjoyed the performances, and really enjoyed the dinner table scene. That's the best scene, and also happens to be the one touching upon something more deep and meaningful. It's a shame that the rest of the film couldn't be like that. As I said though, this is still an okay film as is. Saldana and Kutcher are both decent, but each has delivered better than this. This is really Bernie Mac's movie. He does a great job of playing the suspicious, sardonic, and mistrusting father who's not too impressed with her's daughter's white fiancee. He's got good chemistry with the rest of the cast, and is just a lot of fun to watch. You don't have to see this movie (even though I am mildly recommending it), but if you do, see it for the performances (especially Mac's), and the aforementioned dinner table scene.

Bernie Mac is hilarious! He keeps this average movie going, which makes it soo much better!