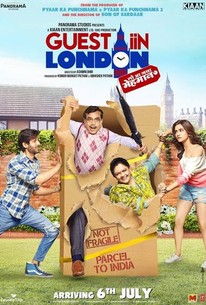 Guest in London is a film that deals with an odd old couple from rural India who lands up uninvited as guests in a suburban London home of a young couple. What follows is a series of misadventures one after the other turning the young couple's lives upside down On another level, the film also captures the socio-cultural differences between the east and the west and in the end with the realization that east or west we all are the same, the emotions are the same and the fact that all we need is love and compassion for each other.

Should a gag, abysmally executed in the first place, be stretched out like a rubber band to keep you rolling in the aisles? These are elements that Guest Iin London has in abundance.

Sadly, Guest Iin London is the kind of film that demands that you leave not only your brains, but also your hearts, home.

The funniest thing about this comedy is just how angry it can make you. Guest iin London, like its titular protagonist, is a burden no one should have to bear.

Nihit Bhave
The Times of India

There are the usual tropes of generation divide, bhartiya sanskar and punjabi weddings which doesn't create any excitement at all.

Hindi cinema is overpopulated with Indians who embarrass fellow citizens by behaving badly in public places, and Guest Iin London should serve as a warning to visa departments the world over.

There are no featured reviews for Guest iin London at this time.