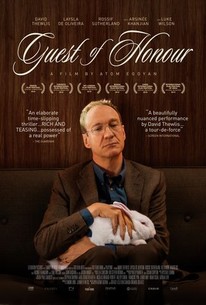 Jim (David Thewlis) and his daughter Veronica (Laysla De Oliveira), a high school music teacher, attempt to unravel their complicated histories and intertwined secrets in the latest film from Academy Award nominee Atom Egoyan (The Sweet Hereafter), which weaves through time exploring perception and penance, memory and forgiveness. A hoax instigated by an aggressive school bus driver (Rossif Sutherland) goes very wrong. Accused of abusing her position of authority with 17-year-old Clive (Alexandre Bourgeois) and another student, Veronica is imprisoned. Convinced that she deserves to be punished for crimes she committed at an earlier age, Veronica rebuffs her father's attempts to secure her early release. Confused and frustrated by her intransigence, Jim's anguish begins to impinge on his job. As a food inspector, he wields great power over small, family-owned restaurants. It's a power he doesn't hesitate to use. While preparing Jim's funeral, Veronica confides the secrets of her past to Father Greg (Luke Wilson), who may hold the final piece of this father-daughter puzzle.

Critic Reviews for Guest of Honour

It's kind of a mess narratively and psychologically.

It feels scattershot and overwrought, unfortunately.

The director's sturdiest creation in a while.

Guest Of Honour, [Egoyan's] latest effort, is decidedly that sort of low-wattage Egoyan classic, serving up familiar preoccupations and structural curlicues-minus any inspiration.

The movie is consistently seductive, and it makes lovely use of a composition by Shannon Graham that is woven into Veronica's work as a music teacher. But... the characters' anguish feels more constructed than organic.

Guest of Honour is grippingly obtuse, at first, like early David Lynch. But eventually, sadly, Egoyan nullifies all narrative possibilities with a silly and cumbersome plotline about an accidental house-fire and a childhood grudge.

While it may not ultimately amount to much on a thematic level, Egoyan's latest is a fascinating experiment from a director who has seemingly found the spark once again.

Egoyan offers a clumsy intellectual exercise. These characters stand out like metaphors in New Yorker magazine short-story fiction. Each one is a stick figure in a narrative maze.

Verónica recounts the torments, and secrets that marked her relationship with her father, which would not be resolved until the end of the movie [Full Review in Spanish]

It may not be a feel-good movie, but it's not a despairing one.

Of rabbits, women and men

Ultimately, the movie could have benefited from a better screenplay and tighter editing. The father and daughter at the center of this story are written as a series of unfortunate events instead of people with emotionally rich and full lives.

There are no featured reviews for Guest of Honour at this time.