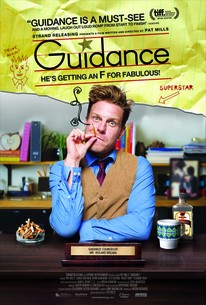 If you think the teenagers at Grusin High have problems, wait until you meet their guidance counsellor.

Robert B. Kennedy
as Ginny's Husband

Goran Stjepanovic
as Prisoner
View All

It's a creative hat trick of wildly amusing proportions.

This is a writer-director to watch.

Pursuing his character's self-destructive, often tasteless agenda, Mr. Mills (drawing on his own experiences and doing triple duty as the director and screenwriter) gives a performance of rancid single-mindedness.

An enjoyable entry into the swelling ranks of corrupt-the-youth comedies.

Guidance manages to be ridiculous and oddly charming.

If Guidance struggles to find the right tone for its mounting provocations, it never yields to the kind of flat-out cynicism that's fashionable in Hollywood comedies.

A very impressive jump by Mr. Mills into the big time. He can play misguided as long as he wants. We need the laughs.

Though it belongs to the same genre, Guidance is nowhere near so good as Young Adult (or even the Jump Street movies, come to think of it).

Mills skilfully sets up characters and situations, draws strong work from his cast of mostly locals (expert at playing straight-faced) and makes fine use throughout of a silly motivational recording David's seen making in the first scene.

This movie starts off great, but crashes in the third act, when it drives too far into fantastical territory, abandoning its on-point realistic dramedy vibe for a farcical on-the-run trope. If this film had stuck to being the funny version of 'Detachment', it would have been a must-see. As it is, it's a skip. Even if you did a "Where are They Now?" for everyone you knew in high school and middle school, this will still be more disappointing in the wasted talent category than the kid with a 4.2 GPA and Ivy League scholarship who became a faceless bureaucrat.

Another one of the sleeper hits of the year and one that establishes Pat Mills as writer/actor/director to really watch out for. According to Wikipedia, before this movie, Pat Mills hadn't taken an acting since 1994, he made his own short films in the interim, and maybe appeared in them, I wouldn't know, but it's impressive how easily he steps back into this world and acts like he hasn't been gone for 21 years. And this sounds as if I actually saw Pat Mills before this, but I haven't. I'm just saying that one would think, not taking a role for 21 years, that there'd be some rust and there's really none that you can notice when you watch this film. Of course, and this is the case for almost every movie, the editing will be favorable, as in they'll choose the best cuts and put those in as opposed to the less refined cuts, but Pat Mills is really damn good here. The film takes a look at a former child actor, David Gold, who pretends to be Roland Brown in order to get a job at a high school as a guidance counselor, as if that wasn't obvious by the title and the description. David, being in a state of arrested development, he clings to the days of his youth, he spends his off time watching videos of the show he was on as a kid, wants to be a guidance counselor because it's a way to relive the days of his youth, when things were much easier to deal with. It's obvious that David is a man with a lot of problems that he has refused to work on because it means admitting to himself that his life didn't turn out the way he wanted to. From his failed acting career, his inability to hold a steady job to his family life, to his sexuality, David would have to admit that all of it didn't go the way he wanted to. And, watching the movie, admitting that his life choices have led him down the wrong path is something that David simply wouldn't do. The film is about that progress that David takes in accepting his life as it is and trying to make the best of it. It's not as sentimentally corny as it sounds, I think Pat Mills does a great job at making David into a really likable character that you want to see get out of his situation. It's obvious that the guy has his flaws, but you still like him and want to see him succeed. That's all due to Pat Mills' writing of the character and the story, the film certainly entertains, but there's also a lot of heart and warmth in here. While, clearly, David connecting and helping the kids at the high school the way he did is wrong, he trades alcohol for weed, tells some of them to be slutty and happy about it, drinks with the teens, but there's also something to be said about his theory of relating to the teens on their level. I don't think that necessarily means doing what David did, but there's something there that could legitimately be applied in real life. Like finding someone who's able to relate or connect with the teens in some way that is actually helpful to them and not just being another authority figure, as it were. So the film makes some good points about that system while also entertaining. The montage scenes of David helping out the kids are some of the funniest in the entire movie. The film, at an incredibly short 80 minutes, even less than that with credits, is super easy to watch and it's almost kind of disappointing. And it's about as fully realized a 78-minute movie that you will ever see. It's funny, a great cast and a really good story. Some movies fail at getting even one of those elements in longer movies, so the fact that this film succeeded at being so complete is something to praise. I wouldn't say it's perfect, what movie is, really, but I would highly recommend this. I really enjoyed this movie a lot. Looking forward to seeing what Pat Mills does next as he had a really good start with this movie here.

Quirky, hilarious, fun. Movies like "Guidance" are the reason I love indie films.