A Guide for the Married Man1967 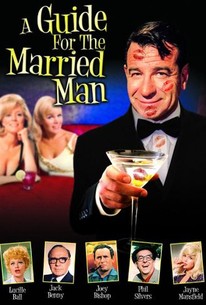 A Guide for the Married Man Photos

Ed Stander (Robert Morse), with the help of an all-star cast, teaches Paul Manning (Walter Matthau) the fine art of philandering in A Guide for the Married Man. Paul, happily married to sexy Ruth (Inger Stevens), has no burning desire to cheat, but Ed makes the prospect sound very attractive. Finally taking the "big step" with a glamorous brunette after months of careful preparation, Paul finds that he loves his wife way too much to betray her -- while the ever-careful Ed ends up in divorce court. Among the myriad of "advisors" peppered throughout Guide for the Married Man are Art Carney, Lucille Ball, Jack Benny, Jayne Mansfield, Terry-Thomas, and Carl Reiner. The best guest-star vignette features Joey Bishop as a man caught in bed with another woman by his wife -- whereupon he calmly puts on his clothes, straightens up the room, and quietly responds to his wife's outrage by saying "What bed? What girl?" Adapted by Frank Tarloff from his book of the same name, Guide for the Married Man was directed by Gene Kelly, who makes a cameo "appearance" of his own as a voice on a TV set. ~ Hal Erickson, Rovi

Heather Young
as Girl with Megaphone

Nancy DeCarl
as Woman With Baby

Warrene Ott
as Woman with Gun

Julie Tate
as Woman in Bed

Sharyn Hillyer
as Girl in Bed

Critic Reviews for A Guide for the Married Man

Matthau and Morse have two of the most versatile talents on the screen, but their roles consist of little more than straight lines.

[A Guide for the Married Man] wallows in its cheapness, and thus has no satiric place to stand.

To be such a pure, poor Hollywood product may be a distinction of sorts.

As in so many of Hollywood's attempts at sex comedies everyone talks about it but nobody really does anything.

Audience Reviews for A Guide for the Married Man

Gene Kelly directs this salad-lite comedy farce (filmed in the swing-tastic 60's ... free love, baby!) about how to cheat in your marriage and keep the marriage. The solution? Lie, baby, lie, and Robert Morse is the swinging nerd offering advice to nervous-but-tempted first timer Walter Matthau. There's plenty of inappropriate-in-the #MeToo era shots of women walking away from you with closeups of their butts. Gene Kelly made this??? And plenty of star cameos too. Light hearted fun.

It was entertaining. I liked seeing the old cars and what everyone wore back then. Why they spent so long trying to figure out how to cheat on his wife, wasn't pleasant but was funny. I agree this movie is so sexist I'm waiting for the remake!

Funny movie about the rules of cheating while married. Ed:" Basic principle number one: Never, NEVER say you'll be where you can be found not to be".

A Guide for the Married Man Quotes