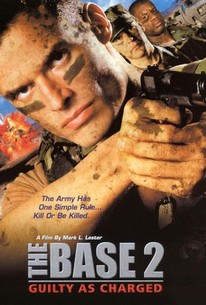 A military leader has taken the notion of discipline in the services too far in this action-drama. Lt. John Murphy (Antonio Sabato Jr., taking over the role played by Mark Dacascos in the first film) is sent in to investigate when a large number of American soldiers are reported missing from a remote military installation. Going undercover, Murphy pays a call to Lt. Col. Strauss (James Remar), and discovers a shocking secret -- Strauss has turned his base of operations into a kangaroo court, with the Lieutenant Colonel and his men serving as judge, jury, and executioners against soldiers who they feel are not living up to the high standards of military behavior. Murphy must now find a way to bring Strauss and his henchmen to justice and save the lives of the unjustly accused soldiers without tipping his hand in the process. Also released as Guilty As Charged, The Base II also features Melissa Lewis, Duane Davis, and Yuji Okumoto. ~ Mark Deming, Rovi

Christopher Caso
as Soldier
View All

Critic Reviews for Guilty as Charged

There are no critic reviews yet for Guilty as Charged. Keep checking Rotten Tomatoes for updates!

Audience Reviews for Guilty as Charged

There are no featured audience reviews yet. Click the link below to see what others say about Guilty as Charged!