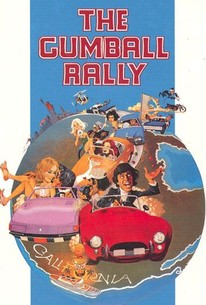 A motley cast of characters race cross-country from New York to California in this comedy packed with car crashes.

John Furlong
as Man on Freeway

Critic Reviews for The Gumball Rally

Former stunt coordinator Chuck Bail produced and directed but he didn't have much of a plot.

It relies almost exclusively on the exceptional stunt work, the plot only occasionally dropping into first gear for some boring and irrelevant dramatic stuff.

People who pay money to see this effort to find knee-slappers in the 55 mile-an-hour speed limit will also make amiable fools of themselves.

Although we are all going to have the greatest difficulty even remembering the name of The Gumball Rally in three months' time, it is a pleasant, slick, inoffensive entertainment.

I don't know why I like this film. If I thought about it too much, I probably wouldn't.

One of many coast-to-coast car-race films indistinguishable from the others.

The cars are the stars

Audience Reviews for The Gumball Rally

As I'm sure many are aware, this movie is based on the real unofficial road race, the Cannonball Baker Sea-To-Shining-Sea Memorial Trophy Dash, or the Cannonball Run for short. This movie (along with the other 76 movie 'Cannonball') pathed the way for other wacky racer type movies such as the Burt Reynolds flick 'Cannonball Run', and in turn other crazy car/trucker movies such as 'Smokey and the Bandit', which in turn led into a CB radio craze with automobiles and trucks. In short Hollywood produced a whole load of car racin', truck drivin', police chasin' flicks after this broke the ice. The plot is...well, kinda stupid me trying to explain isn't it? The contestants race from New York to California, the end. There are no rules, no speed limits and no restrictions on the vehicles, get there as quickly as you can in whatever you can. Essentially This could be the prequel to that Burt Reynolds wacky racers franchise, it plays out exactly the same way and with all the same punches. Just like that franchise there is, of course, a cop on the trail of the Gumballers, trying his utmost to bring them all down. In this movie its Normann Burton as the comical Lieutenant desperately attempting to stop the racers but falling short every time. As you might expect the tomfoolery that ensues is very predictable and these days very unoriginal, but lets not forget this was a fresh idea back in 76. I should point out though, the stunts and carnage on display in this movie is more grounded and sensible than other such movies. Yes there is of course an element of comedy involved but its not outrageously daft and off the wall, most of what you see is relatively believable. But of course there is the odd moment of craziness that shines through, moments that obviously inspired the genre years on, crash wise of course. Nevertheless you can't seem to escape certain obligatory concepts in these all American automobile flicks, one being the ever dastardly redneck, Hell's Angels type biker gang that pop up for a small chase sequence, always good for havoc and mayhem. Another being the always goofy policemen and ever useless squad cars that end up getting decimated or led astray so easily. The racers under starters orders in this movie are a group of character actors I'm not overly familiar with truth be told. The only people I've heard of here is Raul Julia and Gary Busey, Julia paying the womanising Italian scoundrel (so well). Julia teams up with Tim McIntire in a red Ferrari Daytona, they are one of the two main teams in the movie which we follow the most. They are closely challenged all the way by Michael Sarrazin and Nicholas Pryor in a blue AC Cobra, Sarrazin playing the rich race organiser, a bit of a dapper chap. As said we follow these two teams virtually for the whole run time, not much race time is given to the other teams oddly, the finale is one big race between the Ferrari and Cobra with no one else in sight. Definitely some great race sequences on film but you wonder why bother with everyone else. Other stereotypical obligatory racers include, stereotypical southern boys Gary Busey and John Durren in a lovely beige Camero. The stereotypical pairing of two sexy ladies in a black Porsche 911, two aristocratic British old boys in a Merc 300SL, one crazy guy on a motorbike, two guys driving in a police car...yet they actually are real cops apparently, so I dunno why they pretend, and one guy who gets a job driving a Rolls Royce across the country simply to get entry into the race. There is also a van, a Jag and a Corvette but these vehicles don't get too far. Each one of these teams suffers the predictable problems that come with their characters traits. For example the sexy ladies get harassed by some young guys in a muscle car, the old boys poodle along drinking vintage wine and not really caring much about winning, its like a Sunday drive for them. The two cops get stopped by other cops and end up actually helping real people in need, the crazy guy on the motorbike ends up having the majority of the accidents for some reason (probably because the character is unhinged), whilst the two main teams in the Cobra and Ferrari never really have any hiccups. Although, it is amusing how Julia's character keeps getting distracted by sexy ladies which jeopardises the race for him and his partner. I would say this is probably the best of the crazy racer flicks out there, mainly because, for the most part, it does actually deal with proper street racing. The face-off between the Cobra and the Ferrari is pretty well directed with some great engine roaring sequences of speed. To boost that, the actors do look as though they are actually in the cars travelling at high speeds, I doubt they are actually driving the cars but they do appear to be going at a fair rate which adds to the authenticity. Like I said already the only problem is the movie tends to concentrate on the Cobra and Ferrari too much and not any other vehicle. What I like about this is the fact it didn't turn into a cameo filled farce with silly sequels, this movie holds up well today for as a light-hearted jaunt for car fans/petrolheads.

This is one of those movies you find on accident and before you know what hit you (in this case, hit you at 180 miles per hour), you're watching a bizarrely hilarious film from the 70's that should be awful. Basically, it was Cannonball Run before Cannonball Run and it has Raul Julia (more on him later). For those of you who don't know what this means, here's the basic plot. A group of people from across the country (one of them is from Italy) partake in a race every year called The Gumball Rally, an illegal race that sees how fast people can race from New York City to L.A. The results are usually hilarious, with a few gags that fall flat, but the best part of the show is Raul Julia. Raul plays an Italian Grand Prix racer with a Ferrari and a love of all women. He's a very funny and narcissistic character that steals every scene he is in, and ultimately almost steals the whole show. Another star worth noting is a very young Gary Busey, and yes, he's just as crazy in this movie as he is now. As expected, the car chases and inevitable wacky stunts that occur are very fun to watch and extremely funny with an almost cartoony edge to them. If you're bored one weekend and need to kill some time, this isn't a bad way to do it. Not the best comedy of the 1970's, but definitely not the worst.

One of the first of the cross country illegal car racing movies. Like most of them, there is a big cast, and a bunch of stars, and the movie is very funny for the most part. It also has it's unfunny parts, though.

This movie I haven't seen since I bought the DVD this year. It's really hilarious and outrageous illegal road race. Whoo! And a silent moustache motorcyclist is heaps of funny in his accidents.