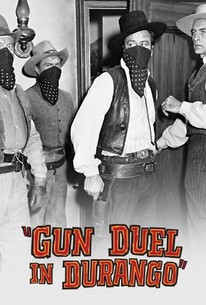 Originally released as Gun Duel in Durango, this solid little western stars George Montgomery as reformed outlaw Dan. He falls in love with ranch owner Judy (Ann Robinson), but she won't accept his proposal until she's certain that he's given up his criminal activities. This proves difficult when Dunston (Steve Brodie), a member of Dan's old gang, shows up, insisting that his former boss rejoin the crooks. Tension mounts until the obligatory final shootout. Former western star Don "Red" Barry shows up in a choice character role.

If you're a fan of George Montgomery you should like this rugged Western.

There are no featured reviews for Gun Duel in Durango at this time.