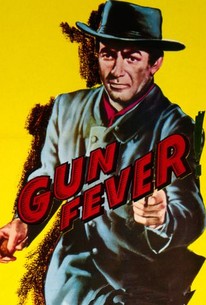 Mark Stevens doubles as star and director of the compact western Gun Fever. Lucas (Stevens) and his partner Simon (John Lupton) set about to capture the renegade white man who caused the deaths of Lucas' parents in an Indian raid. The villain turns out to be Simon's own father Trench (Aaron Saxon), setting the stage for reams of quasi-Freudian dialogue. Larry Storch does a nice semicomic turn as a laconic Mexican, while Jana Davi supplies the love interest. The European prints of Gun Fever were augmented with several steamy sex scenes, with Jana Davi displaying far more than her acting skills.

Budd Buster
as Farmer
View All

There are no critic reviews yet for Gun Fever. Keep checking Rotten Tomatoes for updates!

There are no featured audience reviews yet. Click the link below to see what others say about Gun Fever!