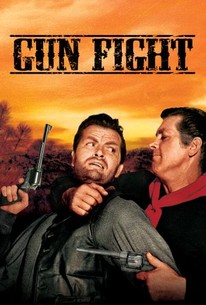 In this western, a discharged cavalry soldier rides a stage to his brother's cattle ranch. En route he meets a dance hall girl. Later he saves her from an outlaw's unsavory advances during a heist. When he gets to his brother's ranch he soon learns that his brother makes his real living by rustling cattle. The disappointed ex-soldier leaves him and goes to a trading post where he marries the dance hall girl. Later, one of the bad brother's men convinces him that his good brother snitched on them to the sheriff leading the rustler to seek revenge. Fortunately he learns that it was all a set-up by the outlaw; instead of killing the good brother, the rustler decides to join him on his fur-trapping excursions. This angers the gang member who rallies the rest of his band together to kill the brothers. The brothers end up killing the outlaws in a shoot-out. Unfortunately the rustlin' brother is also killed. The good brother and his wife end up naming their first born daughter after him. ~ Sandra Brennan, Rovi

Bob Woodward
as Mantz
View All

There are no featured reviews for Gun Fight at this time.