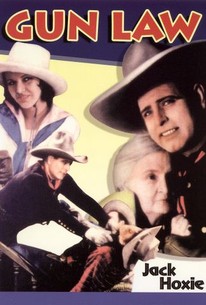 In his penultimate Western, former silent screen cowboy Jack Hoxie plays The Sonora Kid, an outlaw who, to spare an old blind woman's feelings, pretends to be her long-lost son. The nasty Nevada Smith (J. Frank Glendon), a cattle rustler, confuses things considerably by pretending to be The Sonora Kid himself, with the real kid unable to defend himself because of his own deception. Nevada is killed in the ensuing fight and buried as The Kid. The U.S. marshal (Bob Burns) realizes the truth but leaves well enough alone. A free man at last, the former Sonora Kid can settle down with the old woman's pretty niece (Betty Boyd). Playing the blind victim of Hoxie's deception, white-haired Mary Carr was Hollywood's most motherly mother. Years younger than she appeared, Carr became a major star playing the prototype of suffering motherhood in the classic tearjerker, Over the Hill to the Poorhouse (1920). But as one noted film historian put it, "Mrs. Carr could arouse sympathy from an audience without evidencing that she could really act."

Horace B. Carpenter
View All

There are no critic reviews yet for Gun Law. Keep checking Rotten Tomatoes for updates!

There are no featured reviews for Gun Law at this time.