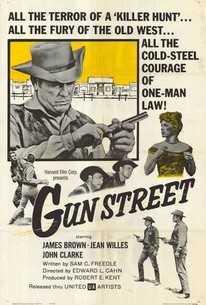 This routine, often disappointing, "B"-grade, low-budget western is directed by Edward L. Cahn and was the penultimate film of his career. (He died the year after Gun Street was released.) The story is mainly one long chase, as the Sheriff (Jame Brown) goes after an outlaw. One obstacle after another and one close call after another keep on cropping up as the Sheriff gets closer and closer to his prey. In the meantime, the usual stock characters show up -- the gambling casino madam (who has set her romantic sights on the Sheriff), and his self-effacing sidekick both have their moments. The finale, however, is not the expected last-ditch shoot-out. ~ Eleanor Mannikka, Rovi

Renny McEvoy
as Operator
View All

There are no critic reviews yet for Gun Street. Keep checking Rotten Tomatoes for updates!

There are no featured reviews for Gun Street at this time.