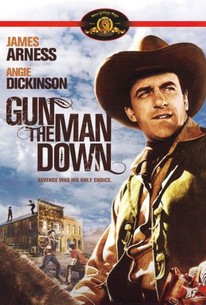 Gun the Man Down Photos

Two years into Gunsmoke, James Arness took time out of his busy schedule to star in the medium-budget western Arizona Mission. Trading in his white hat for a black one, Arness plays a bandit. He and partners Robert J. Wilke and Don Megowan pull off a robbery; the partners then vamoose with the loot, leaving Big Jim empty-handed and seriously wounded. He is also betrayed by his lady friend Angie Dickinson. When Arness finally catches up with his former chums, he decides to "psych" them out rather than fill them full of lead right off the bat. Written by future director Burt Kennedy, who'd penned many a "Mexican standoff" picture for Randolph Scott and Budd Boetticher, Arizona Mission represented the first big-screen directorial effort for Andrew McLaglen. The film was originally released as Gun the Man Down.

Critic Reviews for Gun the Man Down

The story is certainly not original.

Audience Reviews for Gun the Man Down

Gun the Man Down Quotes