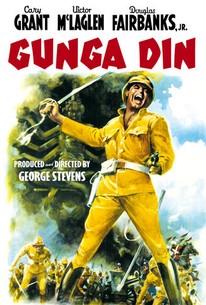 Though Rudyard Kipling's poem Gunga Din makes a swell recital piece, it cannot be said to have much of a plot. It's simply a crude cockney soldier's tribute to a native Indian water boy who remains at his job even after being mortally wounded. Hardly the sort of material upon which to build 118 minutes' worth of screen time-at least, it wasn't until RKO producer Pandro S. Berman decided to convert Gunga Din into an A-budgeted feature film. Now it became the tale of three eternally brawling British sergeants stationed in colonial India: Cutter (Cary Grant), McChesney (Victor McLaglen) and Ballantine (Douglas Fairbanks Jr.). Ballantine intends to break up the threesome by marrying lovely Emmy Stebbins (Joan Fontaine), while Cutter and McChesney begin hatching diabolical schemes to keep Ballantine in the army (if this plot element sounds a lot like something from the Ben Hecht and Charles MacArthur play The Front Page, bear in mind that Hecht and McArthur shared writing credit on Gunga Din with Joel Sayre and Fred Guiol; also contributing to the screenplay, uncredited, was William Faulkner). All three sergeants are kept occupied with a native revolt fomented by the Thuggees, a fanatical religious cult headed by a Napoleonic Guru (Eduardo Ciannelli). Unexpectedly coming to the rescue of our three heroes-not to mention every white man, woman and child in the region-is humble water carrier Gunga Din (Sam Jaffe), who aspires to become the regimental trumpeter. Originally slated to be directed by Howard Hawks, Gunga Din was taken out of Hawks' hands when the director proved to be too slow during the filming of Bringing Up Baby. His replacement was George Stevens, who proved to be slower and more exacting than Hawks had ever been!

Ann Evers
as Girl at Party

Audrey Manners
as Girl at Party

Fay McKenzie
as Girl at Party

Stevens's deliberate pacing serves the comedy remarkably well, although the action scenes are blunted by too-careful compositions and artsy cutting.

This is a pretty spiffing adventure yarn, with some classically staged fights, terrific performances.

Cary Grant, it seems, is becoming one of the screen's subtlest comedians and, perhaps, a brilliant actor.

An entertaining, if antiquated feature made all the better by the three well-appointed leads.

One of the better adventure movies from the 1930s.

As breezy as the pipe playing Seaforth Highlanders marching to battle without a care in the world.

A little jingoistic today, the film is nonetheless a critical standard-bearer of historical adventure flicks, and a quite funny one too.

If PC backlash makes such classics like Gunga Din difficult to revisit, so be it. At this point, there's no getting around it.

The best one could ever say for it is that its hinges were once merely creaky instead of frozen.

This hugely exciting adventure film was one of director George Stevens' last pure entertainments before he went off to war and came back as a 'serious' filmmaker.

Gunga Din has served as the inspiration for countless adventure yarns over the decades.

Cary Grant and company ruin a lot of brown peoples' days, 1800s-style. Loosely based on the poem by Rudyard Kipling, follows three british military officers as they party and fight their way through Indian deserts. When they're not getting drunk and beating up each other, the three army pals are taking on the thugee cult, fist-pummeling dozens upon dozens of angry thugs. Gunga Din is a fun movie, and it was apparently a huge inspiration to Steven Spielberg, as it was a source of major inspiration for "Indiana Jones and the Temple of Doom".

This movie was better than I expected, and I loved Cary Grant in the movie, it was the ending that I liked best. The movie has some boring scenes, and the story is a bit silly. I wasn't sure what to rate this movie, you'll have to see it for yourself.

Rudyard Kipling's poem is translated to the screen by the pulsatile direction of George Stevens. The best thing about this classic adventure is the chemistry between the great actors involved in it, they are all charming and funny, a magnificent triumvirate formed by Cary Grant, Douglas Fairbanks Jr. and Victor McLaglen; with special mention to Sam Jaffe as their humble and valiant waterboy Gunga Din. Along with 'The man who would be king' this is probably the peak of the "colonial" adventure movies, in both are explored always relevant themes like greed, vital quest and the value of friendship. Sheer and unadulterated joy.

Sgt. Archibald Cutter: Now you're all under arrest. You too, and you know why. Her Majesty's very touchy about having her subjects strangled. Cary Grant stars in this 30s adventure flick based on a poem by Rudyard Kipling. It involves a few British soldiers in India during the 19th century who act more like musketeers. They mainly want to have a good time together, getting into squabbles, fighting there way out of things. Grant plays the one who seeks treasure, and finds the key to getting it, except for a ruthless cult that gets in the way. This is just a great movie about having fun. Very old school, but there's no school like the old school. Sgt. Archibald Cutter: Well if it ain't young toad face. Fancy meeting you here. Guru: Vile dog! For that insolence you shall grovel before my son. You shall grovel, I say! Sgt. Archibald Cutter: Look here! I'm a soldier of her Majesty, the Queen. I don't grovel before any 'eathen. Guru: Tabul, take him to the tower and teach him the error of false pride. Take him away!