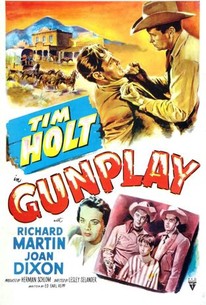 Tim Holt rides again in RKO's Gunplay. This time, Holt and saddle pal Chito Rafferty (Richard Martin) try to solve a murder. The victim is the father of 11-year-old Chip Martin ([Harper Carter]) (best known for his portrayal of Clifton Webb's son in Titanic). At stake is a huge inheritance, which young Chip may lose to the head villain (who, of course, masterminded the murder). RKO's Tim Holt series was beginning to show its age, as indicated by the comparatively small box-office take of Gunplay. Nevertheless, the studio continued grinding out low-budget westerns until 1952. ~ Hal Erickson, Rovi

Tim Holt
as Himself

Cornelius Keefe
as Sheriff (as Jack HIll)
View All

There are no critic reviews yet for Gunplay. Keep checking Rotten Tomatoes for updates!

There are no featured reviews for Gunplay at this time.