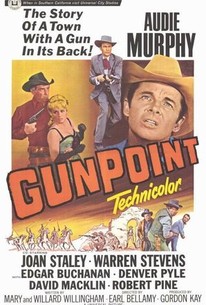 Gunpoint stars Audie Murphy as a Colorado sheriff -- and never mind that the film was shot in Utah. Sheriff Lucas (Murphy) sets out to bring bad guy Drago (Morgan Woodward) to justice. If the sheriff doesn't succeed, that will be fine and dandy with deputy Hold (Denver Pyle), who's out to get Murphy's job. Edgar Buchanan took a break from Petticoat Junction to play the sort of comic relief he'd been doing in westerns for years. Gunpoint's well-photographed but economical highlights include a wild horse stampede and a shootout with disgruntled Apaches.

There are no critic reviews yet for Gunpoint. Keep checking Rotten Tomatoes for updates!

There are no featured reviews for Gunpoint at this time.