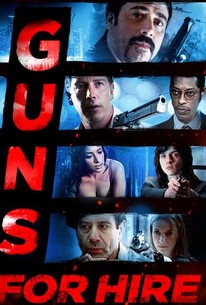 An outsider and would-be hitwoman looks to avoid a psychotic contract killer in this comedy thriller written and directed by Donna Robinson. Beatle (Michele Hicks) is a loner who is in the process of shooting an infomercial when she meets the alluring Athena (Ever Carradine), a blonde with a death wish whose former boss (Ben Mendelsohn) sends a crazed hitman (Jeffrey Dean Morgan) to hunt down the new friends. As the new pair organize a scheme involving Athena's life insurance policy, a detective (Raffaello Degruttola) watching their every move tries to close in on them.

Ever Carradine
as Athena

Jeff Enden
as Salesman
View All

Critic Reviews for Guns for Hire

There are no critic reviews yet for Guns for Hire. Keep checking Rotten Tomatoes for updates!

Audience Reviews for Guns for Hire

There are no featured audience reviews yet. Click the link below to see what others say about Guns for Hire!