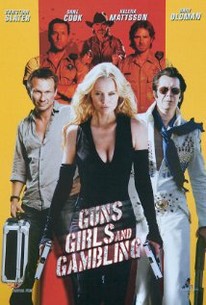 Wrongly accused of stealing a priceless Apache artifact at a reservation casino, unlucky John Smith is being hunted by assassins, sheriffs, cowboys, Indians, Native Americans...and Elvis impersonators. And unfortunately for John, he only has 24 hours to hand it over, or they are all going to kill him. Christian Slater, Dane Cook and Gary Oldman star in this fun, quick-witted, gun-smoking crime thriller. (c) Laemmle

Helena Mattsson
as The Blonde

Powers Boothe
as The Rancher

Jeff Fahey
as The Cowboy

A movie first and foremost about other movies, a derivative of derivatives, "Guns, Girls and Gambling" is like a losing hand at cards: It could have been a winner, but just isn't.

Nothing witty about this blood-soaked action flick. But for fans of the genre, it might be a decent time-passer, providing you don't mind "stupid." Most of the jokes miss the target.

For a movie in which you hope to see plenty of girls and guns, you really only get the guns... of the metal kind, that is.

First thing that hit me here...this is a rip off of '3000 Miles to Graceland' surely, it even stars Christian Slater who does yet more Elvis mincing. On top of that guess what...its another crime heist, but this leans more towards the comedic side admittedly. Ah Mr Tarantino you have a lot to answer for, so many films now use your jumbled up crime plot route its ridiculous, and here we go again. A group of Elvis impersonators are after a native Indian relic, so are some crooked cops, a cowboy hitman, a female assassin and a crime kingpin called 'The Rancher'. They all think Slater has it but he doesn't, no one knows who has it and naturally they're all trying to kill each other left right n centre. This film follows the trail of so many other heist films these days. It starts off randomly with sub plots and main plots that link into each other later. Characters are introduced like a videogame with their names popping up on screen alongside hokey graphics which looks so tacky now. All the characters are cliched unoriginal and mundane...'The Rancher' who looks like 'Boss Hog', 'The Cowboy' 'The Chief' 'The Indian' 'The Blonde' all speak for themselves really, oh geez!. Then of course you have the four Elvis impersonators, an Asian, a black midget, a homosexual and Gary Oldman who clearly can't do Elvis impressions. The film pretty much consists of all these characters running around shooting at each other and beating up Slater. The comedy attempts to be quirky and witty with freeze frame moments, flashbacks, bits of dialog on screen and a lot of silly hammy action and one liners. I must admit some of the gun action is quite good, there is some blood and gore at times which does make the film feel better than it should...or more exciting anyway. Had this been a PG-13 it would have been pretty tiresome, just like the 'Red' franchise. Obviously they included a hot blonde female assassin in a figure hugging black catsuit to attract more viewers...OK OK it worked. As with a lot of these straight to DVD crime heist flicks its an ensemble cast which is impressive, clearly everyone thought they might be in the next big crime comedy. Powers Boothe, Oldman, Jeff Fahey, Chris Kattan (where has he been?!), Tony Cox and Slater, OK so a few big names and a few B-movie stars. And if you haven't already guessed, as with many of these types of films, there are plenty of twists and turns as the ending looms. I would say its keeps you on your toes but you know damn well there will be twists, its so predictable, you know the main bad guys and the main good guys will have plot twists. We've seen all this stuff before time and time again, Hollywood is running out of plot ideas quicker than you can say Hollywood is running out of plot ideas. The only thing here which is remotely interesting are the Elvis impersonators, but even that has been done before in '3000 Miles to Graceland' and much better. There definitely needed to be more of Kattan as 'gay Elvis'.

It's not called a midget it's called a little person.. Very good movie! The title says it all. This movie is all about the fun, no award buzz here, but I really liked it. The twists in the storyline are nice, and it was nice to see Slater dawn the Elvis sunglasses again. The films' chronological time-jumping is it's best asset. In that way, the film is actually put together quite well, and works. The ending will proof to you that it was thought through scene by scene and if you can oversee the bad ratings and watch it with an open mind you will love it. This story throws Elvis impersonators, Native Americans, a cowboy, a drop dead beautiful blond assassin, a frat boy, two corrupt sheriffs, the girl next door and a prostitute into a chase for a million dollar Native American artifact stolen during a poker game at a casino.

"That title alone is, I'm sure, some guys and gals wet dreams come true. :) It was a good enough movie. I only watched it because I saw that Gary Oldman was in it. I like Christian Slater too, but I haven't liked a lot of stuff he's been in lately. I was a little surprised that Gary Oldman would do such a low budget film. But I've seen him in worse (Red Riding Hood). I can only assume he does movies like these for fun. The story is about four or five (I can't remember) Elvis impersonaters, some Cowboys and Indians, and a lethal Blond all on the hunt for a tribal mask that was stolen from the Indian casino during a poker game. You also have some shady sheriffs and a rancher thrown into the mix as well. Its entertaining if nothing else. But it's nothing I would see again."