The Guns of Navarone1961 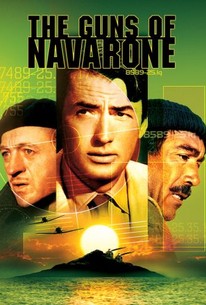 Critics Consensus: Bolstered by a cast of memorable stars and an impressive sense of scale, The Guns of the Navarone fires with vivid characterization and entertaining spectacle.

Critic Consensus: Bolstered by a cast of memorable stars and an impressive sense of scale, The Guns of the Navarone fires with vivid characterization and entertaining spectacle.

The Guns of Navarone Videos

The Guns of Navarone Photos

This spectacular World War II epic finds 2,000 trapped soldiers on a Greek island by Nazi invaders. Their only hope of escape is by boat. A small party led by Mallory (Gregory Peck) must make it by the radar station and immense firepower at Navarone. Miller (David Niven) is the demolition expert needed to sabotage the fortress. The men must scale the massive cliffs in order to blow up the enemy stronghold. Anthony Quinn plays the Greek resistance officer who battles with Mallory. Stanley Baker, Richard Harris and James Darren also star in the $6,000,000 production. Musical score is provided by Dimitri Tiompkin.

Critic Reviews for The Guns of Navarone

Above all, the film lacks a firm controlling hand which would have ironed out passages of incoherent editing and made the climax really tell.

David Niven is the subservient but stylish chemist Miller, rounding out a film that ranks among the best war movies.

The finale is a touch overdramatic, but the film is nonetheless a first-class war epic.

The movie holds up pretty well as a rousing action picture, and also throws in a couple of comments about the contradictions of war.

One of the best WWII action-adventures, with an all-star cast headed by Gregory Peck, Anthony Quinn, and David Niven, this Oscar-winner (in special effects) is stirringly directed by the vastly underestimated J. Lee Thompson

The Guns of Navarone has long been a big-time favorite of the war-movie aficionados, and the film still holds up resoundingly well today.

It was forgettable but highly entertaining.

A good old-fashioned Nazi ass-whomping, aided by some great effects and a charming pair of heroes.

Audience Reviews for The Guns of Navarone

A group of soldiers must blow up a bank of guns in order to get a strategic advantage in WWII. This film starts out as a basic "guys on a mission" movie, a propagandistic glory epic typical of post-WWII cinema. Toward the beginning, the indomitable Gregory Peck might as well be the swaggering John Wayne, and David Niven could be the wise-cracking Lee Marvin in Cat Ballou. But as the plot thickens and we get to know the characters, the film grows a soul. The efficacy of violence and the cold-heartedness of Mallory become relevant social themes in lieu of performative bad-assery. Miller (Niven's character) serves as the film's conscience, and no one can have a more articulate conscience than the voice and wit of David Niven. It takes a while, but questioning these characters' ethics serves to deepen the film's effectiveness. Overall, "guys on a mission" films can be trite and uninteresting, but this one rises above its genre by the end.

A classic action-adventure that even it's time, can still deliver the goods. Two and half hours of pure excitement and intelligence. One of the greatest action-adventure films ever made. A masterpiece. An exciting, riveting and action-packed thrill-ride. A smart, well-crafted and suspenseful piece of film-making that works extremely well. A tremendously entertaining and vastly epic movie. A trio of brilliant performances from Anthony Quinn, Gregory Peck and David Niven. They are a charming pair of heroes who all have the goods to take down the bad guys and save the day. These particular brand of films still work and have energy and skill to blow away other films of today who have tried to accomplish what this one has.

An exciting action film about WWII. David Niven is a little absurd, and the romance story was not executed as well as it could have been. Nevertheless, its a favorite war film of mine.

Great action - especially for a movie filmed 50 years ago. The only thing that bugs me - we are supposed to shed a tear for the four members of the British task force who don't make it, but not give a poop for the 50+ German soldiers they kill.

The Guns of Navarone Quotes