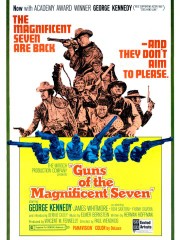 Guns of the Magnificent Seven

Guns of the Magnificent Seven Reviews

Johnny R
January 1, 2018
160130: The biggest problem with this film, other than the occasional flaw, is the pace. She just putts along, not quite quick enough, not quite exciting enough. Michael Ansara, as Col. Diego, makes a great villain. Decent film but following in awful big footsteps.

Dustin D
October 3, 2016
Guns of the Magnificent Seven has a better ensemble than the other sequels (not counting the newest), but it ultimately feels formulaic and slapped together. This at times causes tonal dissonance (see the scene where the blaring theme song halts when the Seven come across villagers who were hanged from telephone poles, then the music picks right back up as they move along like nothing happened). Joe Don Baker's and Bernie Casey's character arcs are totally predictable. This film is too similar to the original to really justify its existence.

Carlos I
July 20, 2015
Well the recasting is weird. George Kennedy and Yul Bryner are nothing alike. Still, this is a great cast and fun sequel. better than the last one.

Timothy J
January 31, 2015
A poor attempt to capitalize on the original.

Dean K
½ December 6, 2014
In the second sequel Chris (now played by George Kennedy) saves a man named Keno (Monte Markham) from a hanging. Together they aid the Mexican revolution by springing one of their leaders from prison.

Of the sequels, this script and story are probably the best. But I never bought George Kennedy and the charismatic leader that pulls together an ill-fated motley crew for a prison break. The best thing I can compare this to is watching the Bond movie "On Her Majesty's Secret Service" and missing Sean Connery.

Funny how the weakest entry in the series has the best script. (2.5 out of 5) So Says the Soothsayer

Boris M
August 30, 2013
Third movie in the Magnificent Seven series. Acting crew has been replaced, while character of Chris is the same character. This time around a cousin of one of the Mexicans is looking for help to break their leader out of prison. Of course, everyone in Mexico is a cousin.

Tim M
January 5, 2013
Solid western. Not a sequel as much as it is a remake in a way. Bernie Casey and Joe Don Baker were amazing together and you really get to seem them work well before they get real famous.

Hugh F
½ February 28, 2012
Meh, classic generic western, not near as good as the original.

A slick talking young Mexican revolutionary talks the leader of his organization into investing $600 to hire some American outlaws to help their cause. The American accept the money and join the revolutionaries in hopes of rescuing their captured leader and helping the Mexicans earn their freedom.

"Have fun with both of your wives."

Paul Wendkos, director of Fear No Evil, Gidget, Face of a Fugitive, The Underground Man, Honor Thy Father, and The Bad Seed, delivers Guns of the Magnificent Seven. The storyline for this picture is fairly straightforward and common for the western genre. The script was okay but the characters were a bit under developed. The cast delivered solid performances for the genre and includes George Kennedy, James Whitmore, Bernie Casey, Monte Markham, and Joe Don Baker.

We were huge fans of the original Magnificent Seven picture so we decided to give this picture a shot. This picture was interesting and had some great action sequences and characters; however, the characters could have been better developed. Overall, this is a worthwhile western picture but does not live up to the previous Magnificent Seven picture.

"Buffalo Bill? Never heard of him."

Ryan B
January 1, 2011
Really enjoyed this film. Chris (George Kennedy) takes the lead role in this one, leading the magnificent seven to a jail break. Worth a watch

John A
October 20, 2010
George Kennedy Replaces Yul Brynner As Chris, Who Recruits A New Posse For His Lateset Job, The Seven Are Hired To Rescue A Revolutionary Leader, During The Mexican Revolution.

Zack B
½ September 3, 2010
Gritty movie that is essentially, like all the sequels, the same as the original. George Kennedy does a decent job filling in for Brynner, but the rest of the "7" from the first are missed.
Page 1 of 3