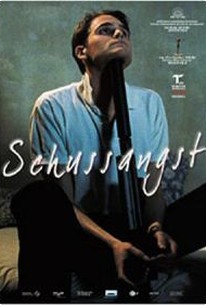 Georgian filmmaker Dmitriy Tsintsadze directs the psychological drama Gun-shy, based on a novel by Dirk Kurbjuweit. Rather than serve in the military, sensitive young Lukas (Fabian Hinrichs) opts to do community service in order to fulfill his government requirement. His duties involve delivering food to old people like the former prostitute Sieveking (Ingeborg Westphal) and the war veteran Beckmann (Rudolph W. Marnitz). One day on the bus, a strange young woman (Lavinia Wilson) slips him a note that reads "Help Me." He follows her, learns her name is Isabella, and discovers she's involved in an abusive relationship with her stepfather, Romberg (Johan Leysen). After Lukas finds out that Romberg is also a big-time motivational speaker, he's moved to do something about the situation. Director Tsintsadze also contributes to the original musical score. Gun-shy was shown at the 2003 Toronto Film Festival. ~ Andrea LeVasseur, Rovi

It's an odd movie to be sure, both creepy and sweet at times, and it's certainly fun to watch.

Full of absurd visual humor and an ending that made me jump out of my seat even though I could see it coming a mile away.

What works beautifully are all the moments of black comedy that give flavor, but don't necessarily build upon the film's themes.

There are no featured reviews for Schussangst (Gun-shy) at this time.