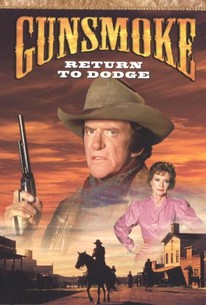 James Arness returns to the role of US marshal Matt Dillon after a twelve-year absence in the made-for-TV Gunsmoke: Return to Dodge. Amanda Blake is also back as Miss Kitty, "hostess" of Dodge City's Long Branch saloon. The plot involves Dillon's reunion with Kitty in a Dodge City festooned with bad guys, chief among them a plugugly named Mannon (Steve Forrest), who has sworn to kill Matt. For those who weren't around for the original Gunsmoke TV series (which ran from 1955 through 1975), this film provides us with several clips from the old series, presented as flashbacks. Vincent McEveety, director of many an old Gunsmoke installment, calls the shots on this reunion special. Filmed not in the wilds of Kansas but in Alberta, Canada, Gunsmoke: Return to Dodge premiered on September 26, 1987.

Steve Forrest
as Will Mannon

There are no featured audience reviews yet. Click the link below to see what others say about Gunsmoke: Return to Dodge!