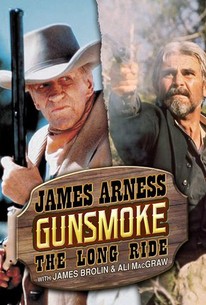 James Arness made his first appearance as Marshal Matt Dillon in eight years in the 1993 TV movie Gunsmoke: The Long Ride. Inasmuch as Amanda Blake (Kitty) and Milburn Stone (Doc) had passed on, and Dennis Weaver was disinclined to revive the role of Chester, big Jim pretty much goes it alone in this one. The plot is set in motion by a trio of murderous robbers. Matt Dillon chases after the threesome, while he in turn is being chased by a posse who thinks that Matt is the gang's boss. Featured in the cast are James Brolin as a helpful frontiersmen, and Ali McGraw as "Uncle" Jane Merkel (we're not about to explain that one). Gunsmoke: The Long Ride was originally telecast May 8, 1993.

If you were a fan of the adult Western Gunsmoke serial on TV (1955-75), then the chances are good you would also find this made for TV movie to your liking.

There are no featured reviews for Gunsmoke: The Long Ride at this time.