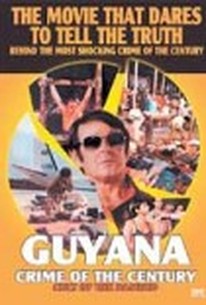 "Names have been changed to protect the innocent" in this infamous fictionalization of the tragic mass suicide of 914 followers of Jim Jones' "People's Temple" in Guyana in the fall of 1978. Rev. James Johnson (Stuart Whitman) is a charismatic but deeply paranoid man of the cloth who moves his flock from Northern California to a settlement in Guyana, where he intends to create an interracial socialist utopia. Addicted to prescription drugs and convinced he is surrounded by enemies, Johnson rules his colony, "Johnsontown," with an iron fist, torturing anyone who violates his rule, seducing both women and men from his congregation, confiscating money and property from his followers, and forcing them to work long hours in the fields for meager rations. Lee O'Brien (Gene Barry), a California congressman who represents the district Johnson and his followers once called home, has received complaints from friends and relatives of the Johnsontown settlers, convinced something is wrong. O'Brien and a team of reporters fly to Guyana to find out the truth about what is happening; Johnson is convinced O'Brien has seen too much, and armed gunmen ambush his party before they can return to the United States (with a number of Johnsontown residents who wish to leave). After a failed attempt to arrange exile in the Soviet Union, Johnson convinced his followers to perform a "final revolutionary act" before authorities arrive. This oddball blend of fact and fiction also features Joseph Cotten and John Ireland as Johnson's lawyers, Yvonne de Carlo as Johnsontown's press officer, and Bradford Dillman as the doctor who mixes the punch for Johnson's final gathering. ~ Mark Deming, Rovi

Robert DoQui
as Oliver
View All

Critic Reviews for Guyana: Crime of the Century

The movie brings absolutely no insights to Guyana. It exploits human suffering for profit. It is a geek show. Universal and its exhibitors should be ashamed.

Audience Reviews for Guyana: Crime of the Century

There are no featured audience reviews yet. Click the link below to see what others say about Guyana: Crime of the Century!

Guyana: Crime of the Century Quotes