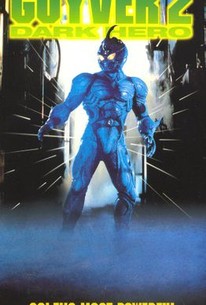 In the original sci-fi adventure, the Guyver was an heavily armored alien creation that turned a normal American college boy into an indestructible super hero who then took on the dreaded shape-changing Zoanoids before they overtook the earth. In this outing the mechanized hero must take on a terrifying alien that was accidentally unearthed during an archaeological dig.

Ted Smith
as Commandos
View All

A simple and entertaining B grade action film...

Steve Wang's second outing with The Guyver accept this time there was a change in casting for the lead role, no big star names, a low budget...but an all new adult rating! Now don't get too over excited as this isn't like the Japanese manga series with blood and gore galore, yes there is blood but only the odd splattering. On the whole I was looking forward to this sequel as I read it had been enjoyed more by the target audience and received generally better reviews. Much to my utter amazement I am again disappointed with the outcome! So OK...yes there is blood but its sporadic, there is still no sign of any decent brutal kickass action or gory mutant mutations as seen in the manga series (I have since checked this out). Basically this movie is still very much like a children's movie and still runs along the same lines as the [i]Mighty Morphin Power Rangers[/i], albeit with a slightly adult twist. Admittedly Wang stays closer to the source material this time and includes the fact that the Guyver suit is virtually corrupting Barker by wanting (and making) him kill. The suit lives inside him and haunts him on a daily basis giving him 'Hellraiser-esque' dreams and visions, its nothing really disturbing and scary but these little snippets do add a depth to the character missed previously. Naturally Barker ends up fighting crime as you might expect but he does end up killing the criminals instead of making taking them in. Unfortunately there are no scenes where he kills an innocent which would really screw him up...its not that dark. Alas once again the fights are chock full of martial arts that don't have any kind of bite or punch to them, the choreographed sequences are well executed but its all so damn fake looking. You can clearly see the strikes are still not really connecting with their intended targets and when they do the monster suits show up how rubbery and foamy they are (once again). The slow motion jiggery-pokery might look cool but in fact it makes things look worse when Guyver and Zoanoid suits clash in real time. And once again the deadly elbow blades are hardly ever used despite the fact they would take out a bad guy very easily and very quickly. This leads me to the Zoanoid monster suits and as I have just mentioned we still have the same issues...they look great with lots of detail but they also look like rubber monster suits. There aren't as many of the Zoanoids this time but what we see are similar in design to the previous ones. There is a decent rhino type monster, another couple big bug types and another Gill-man type creature. What I don't quite get is it seems the Zoanoid from the last movie played by Berryman is back, I'm unsure if it was the same monster or a similar one or maybe the same monster respawned, no clue. The other odd thing is the main Chronos bad guy (the corporation president) seems to back too...or that's what it looked like to me. The Zoanoids contact the Chronos corporation and speak to an elderly man who looks and dresses very similar to David Gale's character in the first movie. As for the plot well this is where I again get confused. I know the manga series differs to the first movie, but this sequel differs to the first movie also. Apparently in this movie Barker learns from the unearthed alien ship (the same aliens that created the Guyver suits, mankind and Zoanoids...I think??) that the Zoanoids are a failed experiment by the aliens. The aliens then equipped humans with Guyver suits to battle the Zoanoids (this is in the past). This contradicts the first movies story which says humans are Zoanoids and created by the mysterious aliens. The Zoanoids then try to take over the Earth and mankind (mankind not spliced with the Zoanoid gene) by creating the Chronos corporation (for some reason a company was required?). At no point did it mention the aliens equipping humans with the Guyver suits to battle the Zoanoids. The Guyver suit was said to be a relic left behind by the aliens...whether on purpose or not I don't know, I thought by mistake, it was never mentioned to have been done deliberately. Of course I could be grasping the wrong end of the stick but I'm not sure, the movie isn't exact to the source. The Guyver suit looks much better in this sequel even though it looked great in the first movie. This time the colour is more bluer, detail is greater, lights are brighter and the suits shape is much more akin to the manga series looking more evil. The main Zoanoid bad guy actually gets a Guyver suit this time which gives us a chance to see a more badass version (in black naturally). Despite being bigger, badder errr...blacker, it doesn't look anywhere near as good as the main Guyver suit. All in all this movie is yet another let down and really frustrating. I don't quite get how it is seen to be better than the first movie when there is little difference between the two. Yeah sure this sequel has some blood in the fights (but less fights) and its a tad darker in places but its still very silly and could be way way better. Heck the locations are worse in this sequel I think, at least the first movie was generally in dark settings, kinda grimy and seedy which added to the atmosphere. I don't think this movie is worse overall, its probably on equal terms methinks, I liked both at times but both could of been so much more awesomer...its such a shame. Again kudos for visuals in general but its lacks some serious guts n spunk.

An almost better attempt to mature the franchise and make it darker and bloodier in this violent sequel. It has some better effects and creature designs, considering its low budget and almost unknown cast.

This was better than the first flick with a step up in the effects department. The action was also better and I liked the story. It's pretty simple though and I think you need to be a fan to really enjoy these movies.