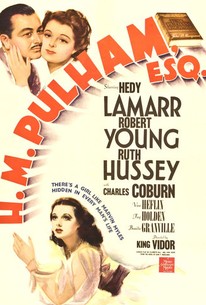 MGM was doing so well in 1941 that it could afford the occasional "prestige" film with little box-office appeal. Based on the novel by J.P. Marquand, H.M. Pulham, Esq., stars Robert Young as a successful but stuffy Boston businessman. The glimmer of sadness in Young's eyes indicates that his ascension to the top was not without its cost. In flashbacks, we see how Young considered changing the track his life was on in order to marry Hedy Lamarr. After marrying his wife, however, the man never strays. The film utilizes the Strange Interlude approach of interior monologues heard on the soundtrack, and anticipates Citizen Kane (which hadn't yet been released when Pulham was filmed) by building its entire narrative on the flashback structure. H.M. Pulham, Esq. contains what may well be Robert Young's best performance, though few filmgoers in 1941 were interested enough to see it.

David Clyde
as Hugh the Butler

Bob Cooper
as Harry as a Boy

Bobby Cooper
as Harry as a Boy

Syd Saylor
as Preacher
View All

An MGM prestige film that was poison at the box office.