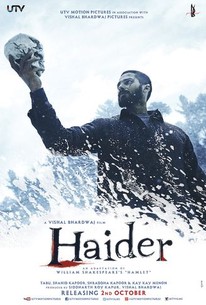 Vishal Bhardwaj's adaptation of William Shakespeare's 'Hamlet', Haider - a young man returns home to Kashmir on receiving news of his father's disappearance. Not only does he learn that security forces have detained his father for harboring militants, but that his mother is in a relationship with his very own uncle. Intense drama follows between mother and son as both struggle to come to terms with news of his father's death. Soon Haider learns that his uncle is responsible for the gruesome murder, what follows is his journey to avenge his father's death.

Irrfan Khan
as Roohdaar
View All

With Haider, [Bhardwaj] wisely forgoes the rough-edged attitude in his other films to embrace a slicker and more sophisticated style; and some of the film's most effective moments are masterful in their visual storytelling skill.

The result is a tense, well crafted drama that lacks the deep emotional intensity required in its disturbed characters.

I doubt if I will be able to forget the stunning visuals which dot the film, but the sum is never more than its terrific parts.

What else can I say? Get thee to a multiplex.

"Haider" may not be the equal of Mr. Bhardwaj's other Shakespeare films, and it may be deficient in the "Hamlet" department, but it certainly gives good Gertrude.

A palpable hit, in any language.

[It] masterfully uses the Bard's work to explore insurgency and conflict. Throw in a career-best performance from Shahid Kapoor and our case is made.

Haider offers a rare combination of not only action-packed entertainment, but also literary panache and geopolitical enlightenment.

Haider starts off promisingly. It's too bad that the promise never delivers.

Using Hamlet as his inspiration, director Vishal Bharadwaj's new film finally does full justice to India's under-rated acting dynamos -- Kapoor and Tabu -- without trivialising the larger issue of Kashmir that forms the backdrop.

To see or not to see is no dilemma here.

Vishal Bhardwaj's Haider goes where Bollywood rarely treads: the movie based on William Shakespeare's Hamlet goes beyond clichés on Kashmir and its characters aren't trying to be entertaining.

There are no featured audience reviews yet. Click the link below to see what others say about Haider!