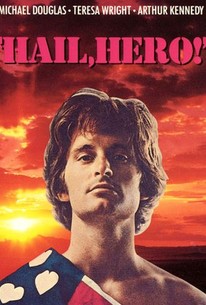 Hail, Hero! stars Michael Douglas in his screen debut as long-haired college student Carl Dixon. Reversing the usual procedure in late-1960s films, Dixon decides to quit school and enlist in the Army, even though he's already run afoul of the law as a Vietnam protestor. It is our hero's intention to use love, rather than bullets, to combat the Viet Cong. Needless to say, his idealism is no match for the harsher realities of war, but this doesn't stop him from endlessly spouting the sort of agit-prop rhetoric so beloved of filmmakers of the era. In addition to Michael Douglas, co-star Peter Strauss likewise makes his first film appearance in Hail, Hero! Dated in the extreme, the film is saved by the musical score by Gordon Lightfoot.

Lucas White
as Jeff
View All

The longest 97 minutes of film I've endured this year.

There are no featured reviews for Hail, Hero! at this time.