Hail to the Deadites2020 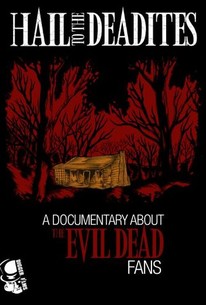 Hail to the Deadites Videos

Hail to the Deadites Photos

"Inspired by the 1981 classic's cult following, HAIL TO THE DEADITES is a documentary about the fans of the EVIL DEAD franchise. Through interviews with the cast, crew, collectors, fans, freaks and geeks, HAIL TO THE DEADITES seeks to illuminate the darkest reaches of the EVIL DEAD franchise's undying and still-growing popularity, a popularity that has spawned four films, a TV series, comic books, figurines, and surpassed even its creator's wildest dreams. HAIL TO THE DEADITES puts the spotlight on the fans that cultivated and spread this groovy pop-culture infection! It celebrates those who've celebrated the films! So, rev your chainsaws and load your boomsticks, it's time to give the DEADITES some sugar, baby!"

Betsy Baker
as Self

Theresa Tilly
as Self

Ellen Sandweiss
as Self

Bruce Campbell
as Self

Tom Sullivan
as Self

Dan Hicks
as Self

Kassie Wesley DePaiva
as Self

Sarah Berry
as Self

Rick Domeier
as Self
View All

Critic Reviews for Hail to the Deadites

The film's one-hour, 19-minute running time frequently seems ponderous because the fan conventions all look the same, regardless of where they are held. You've seen one hotel ballroom; you've seen them all.

Villeneuve captures the cheery cult vibe of the whole thing, also reinforcing just how special these delightfully goofy and grisly movies truly are.

... Hail to the Deadites is, without question, a loving tribute to the people who have enjoyed this particular bit of punk rock horror since its inception.

At an hour and 19 minutes long, Hail To The Deadites suffers from the typical blight of the mega-fan: loving your subject so much that you can't pick apart the good from the bad.

Steve Villeneuve's affectionate exploration of Evil Dead fandom: memorabilia, cosplay, and passion. Primarily made up of interviews with cast, crew, and fans, broken up with songs and fan-made film clips.

Hail to the Deadites is an example of what happens when someone depicts fans without questioning their fandom.

Hail to the cast, hail to the crew, hail to all of the fans and supporters and film-lovers everywhere, hail to Villeneuve for making this wonderfully weird celebration of fandom and friendship.

A breezy, fun, and energetic ode to the classic horror franchise...

The most telling moment comes right at the end; the interview snippets with cast and crew that play over the credits are more interesting than everything that's come before combined, emphasizing the confused intentions at play here.

Hail to the Deadites brings light to a fandom that has been going strong since 1981.

HAIL TO THE DEADITES is a pure clubhouse movie.

There are no featured reviews for Hail to the Deadites at this time.

Hail to the Deadites Quotes