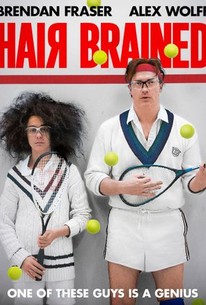 After being rejected from Harvard University, 14-year old genius and outcast Eli Pettifog (Alex Wolff) finds himself at Whittman College, an Ivy League wannabe. Eli meets 41- year-old freshman Leo Searly (Brendan Fraser), a gambler whose world has imploded and has dropped out of life to enroll in college. The odd duo becomes unlikely friends in this comedic, coming of age film. (c) Vertical

Michael Oberholtzer
as Laird
View All

A campus comedy that tries to transcend its many formulaic elements with an insufficient dose of absurdism.

"HairBrained" is painfully contrived and self-consciously quirky from the word go.

Unfortunately, the movie lacks strong enough players to fill in subtext to Mr. Kent's formulaic setups, and the story flounders once Ms. Posey is out of the picture.

Aside from some nice autumnal shots of Ivy League college campuses, there's nothing in HairBrained to sustain much interest.

Early potential fizzles away too quickly in this underachieving buddy comedy, which just barely skids along on the charm of its co-stars.

Billy Kent's charming HairBrained comes from a long legacy of collegiate comedies but still finds its own identity.

HairBrained play like a strangely adolescent offering, squandering its tiny gleams of talent for an onslaught of strained scenarios. Knowledge is power, generally speaking. Here, it's a notion exploited for deflating effect.

HairBrained is enjoyable, lightweight entertainment and, for a story about a genius, it requires very little thinking.

Think a poor man's cross of Napoleon Dynamite (2004) and Old School (2003) where a coming-of-age tale merges with a midlife crisis.

HairBrained is a rather dumb comedy about a sharply intelligent mind, failing due to flat characters, cliched plotting and minimal laughs.

Jordan Adler
We Got This Covered

Hairbrained has a lot of good stuff. There is nothing egregiously wrong with the film. It just needs more of that good stuff.

I gotta give credit to Brendan Fraser and Alex Wolff...I think they bail this movie out so many more times than I can imagine. It's not that the film is lazy, or doesn't try, it's just that it simply tries too hard to tell a quirky, absurd story. Brendan and Alex sort of help keep the story grounded. I'm not the biggest fan of quirk for the sake of it. That's been my main problem with directors like Wes Anderson. They come up with quirky characters first and THEN they come up with a story that, more often than not, doesn't even really justify the characters being as quirky as they are. If the story you're writing lends itself to a more idiosyncratic approach to the characters, then that's one thing. The Coens have managed to adjust their style to a variety of different genres, whereas someone like Wes Anderson does not. Stylistically, all of Anderson's films are the same. I think that's my biggest problem with films that put quirks above good, solid storytelling. You've seen one, you've seen them all. At least Wes Anderson has a great eye for visuals and interesting presentation of those visuals, and his story. This film doesn't even have that. Not that I can blame them for that, I'm sure the budget this film had was minuscule. It just tries way too hard to be indie quirk. To illustrate this point, there's even a pointless scene of Eli and his friends, his other partners in the quiz show contest, performing a song in the park. Why? No real reason, other than this is an indie film and you do those kinds of things in these films. Even if it doesn't make any real sense in the context of the story you're telling. Yes, the songs these guys are performing does relate to something in the film, but the whole part of them performing the song in the park was utterly and absolutely pointless, unnecessary and pretentious. The film has its moments, but those are mostly visual gags you see for announcements on the TV for lost glasses or a lost bottle of prozac. Nothing extraordinary, but somewhat funny. There's also moments during the actual final competition between the Hares and Harvard, but these are mostly from the commentators, who most likely ad-libbed a lot of that, including the post-credits scene. I just feel that the film didn't really know whether to focus on the coming-of-age aspect of Eli's story, seeing him come out of his shell, becoming the most popular kid in school...or Leo's midlife crisis and him trying to hold on to his youth by going back to college. I think the film has an idea of where it wants to go, it just didn't know how to get there, and it shows. But, I mean, Julia Garner is here and she's always good. I think this has its heart in the right places, but this is an amalgamation of everything I dislike about certain indie films. That's not to say the film is awful, but it's not good either. The acting is solid, but that's about it.