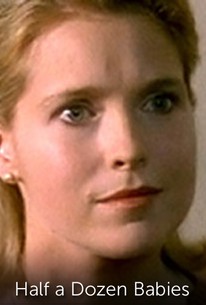 Based on a true story, the made-for-TV Half a Dozen Babies stars real-life married couple Melissa Reeves and Scott Reeves as Indiana couple Becki and Scott Dilley. Unsuccessful in their many attempts to have children, the Dilleys willingly undergo a new, experimental infertility treatment. As a result, in the Summer of 1993 the Dilleys become the proud parents of America's first surviving sextuplets: Julian, Claire, Brenna, Quinn, Adrian and Ian. Now Becki and Scott must not only endure the trials and tribulations of first parenthood, but they must do it six times over--and in full view of a voracious media! Reportedly, the actual members of the Dilley family were none too pleased with the liberties taken in the film, but audiences in general were satisfied. Half a Dozen Babies made its ABC network debut on May 17, 1999.

Critic Reviews for Half a Dozen Babies (Life's Little Struggles)

There are no critic reviews yet for Half a Dozen Babies (Life's Little Struggles). Keep checking Rotten Tomatoes for updates!

There are no featured reviews for Half a Dozen Babies (Life's Little Struggles) at this time.