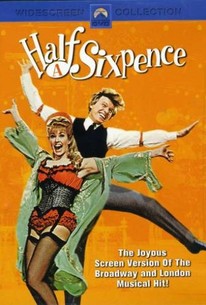 Half a Sixpence Photos

British musical star Tommy Steele had starred in Half a Sixpence in London and on Broadway, thus he was first choice for this garish film version. Based on the H.G. Wells story Kipps (previously filmed in 1941 with Michael Redgrave), Half a Sixpence tells the tale of a humble London drapery clerk (Steele) who inherits a fortune. He briefly forgets his old mates and his faithful girl friend (Julia Foster), but soon discovers that High Society isn't his cup of tea. Filmed during the "monster musical" cycle fostered by The Sound of Music, Half a Sixpence isn't really suited for the spectacular approach dictated by co-producer Charles H. Schneer. Fortunately, the guiding directorial hand is the film's other producer: George Sidney, a veteran of MGM's Arthur Freed unit, who knew how to successfully weld music with story. Thanks to Sidney and star Steele, Half a Sixpence never gets too out of hand, though we'd argue with some of the eyestrain-inducing color choices in the bigger numbers. The film might have done better at the box office had the score yielded a few hit songs. ~ Hal Erickson, Rovi

Humphrey Kent
as The Butler

Frank Crawshaw
as The Carter

Bridget Armstrong
as The Maid

Alastair Hunter
as The Postman

Norman Mitchell
as Master of Ceremonies

Critic Reviews for Half a Sixpence

The songs themselves, trite, gay, and thoroughly meaningless, make absolutely no concession to anything that was happened in popular music the last 10 years.

As beautifully smiling faces waver gently in and out of focus, the sound track drips honey and molasses and horehound drops. Oh love, oh life, ah happy fate, that we, who have split this sixpence in twain as mere youths, should meet again, etc.

Not a great score, but it does have stage original Tommy Steele, a plus.

Audience Reviews for Half a Sixpence

Half a Sixpence is a memorable Musical, but not one of the greatest. Lots of well known songs and of course Tommy Steele is the main attraction. A simple rags to riches tale with a love triangle thrown into the mix

Half a Sixpence Quotes