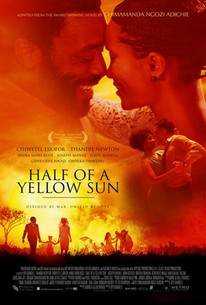 Critics Consensus: While it doesn't quite do justice to the source material, Half of a Yellow Sun adapts Chimamanda Ngozi Adichie's novel with committed performances and narrative nuance.

Critics Consensus: While it doesn't quite do justice to the source material, Half of a Yellow Sun adapts Chimamanda Ngozi Adichie's novel with committed performances and narrative nuance.

Critic Consensus: While it doesn't quite do justice to the source material, Half of a Yellow Sun adapts Chimamanda Ngozi Adichie's novel with committed performances and narrative nuance.

Half of a Yellow Sun Photos

Olanna (Thandie Newton) and Kainene (Anika Noni Rose) are glamorous twins from a wealthy Nigerian family. Upon returning to a privileged city life in newly independent 1960s Nigeria after their expensive English education, the two women make very different choices. Olanna shocks her family by going to live with her lover, the "revolutionary professor" Odenigbo (Chiwetel Ejiofor) and his devoted houseboy Ugwu (John Boyega) in the dusty university town of Nsukka; Kainene turns out to be a fiercely successful businesswoman when she takes over the family interests, and surprises even herself when she falls in love with Richard (Joseph Mawle), an English writer. Preoccupied by their romantic entanglements, and a betrayal between the sisters, the events of their life seem to loom larger than politics. However, they become caught up in the events of the Nigerian civil war, in which the lgbo people fought an impassioned struggle to establish Biafra as an independent republic, ending in chilling violence which shocked the entire world. (c) Monterey Media

Eric Anderson
as Biafran Soldier One

News & Interviews for Half of a Yellow Sun

View All Half of a Yellow Sun News

Critic Reviews for Half of a Yellow Sun

Director Biyi Bandele adapted the book, which was superb and gut-wrenching, but the film turns turgid and shies away from showing the true horrors of the war and is the poorer for it.

Biyi Bandele has excerpted their story from a much wider-ranging narrative, but the action here is still so tightly compressed that this feels like a precis for a movie twice its length.

The best of the movie finds a way to abridge the novel and still allow the scenes to breathe.

"Half of a Yellow Sun" winds up being one of those movies in which a pesky event of great historical import keeps getting in the way of a soap-opera romance.

The result is that melodramatic soap opera elements win out over Bandele's attempts at stirring historical drama. That said, it's still a story worth telling.

There's nothing terrible about Half of a Yellow Sun, but not much good either. A powerful novel has been neutered.

Overall, it's a fascinating slice of modern history that may be unfamiliar to some, which can also give us an insight into the making of contemporary Nigeria.

Half Of A Yellow Sun is a compelling drama [that] ( ... ) form[s] a timeless tribute to the resistance of the human spirit in the face of war time struggle.

An ambitious film worthy of attention, regrettably it doesn't come together quite as powerfully as you'd hope.

A case of laudable ambition collapsed into episodic box-ticking.

The plot goes everywhere and nowhere, coming across as a disconnected series of events rather than a unified whole. Ejiofor and Newton offer solid but unexceptional performances, as though hampered by the director's lack of vision.

Audience Reviews for Half of a Yellow Sun

There are no featured audience reviews yet. Click the link below to see what others say about Half of a Yellow Sun!

Half of a Yellow Sun Quotes