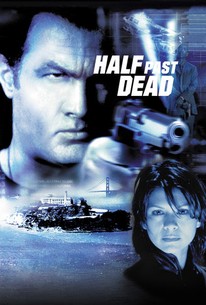 Critics Consensus: Seagal is now too bulky to make a convincing action hero, and Half Past Dead is too silly and incoherent to deliver any visceral kicks.

Critics Consensus: Seagal is now too bulky to make a convincing action hero, and Half Past Dead is too silly and incoherent to deliver any visceral kicks.

Critic Consensus: Seagal is now too bulky to make a convincing action hero, and Half Past Dead is too silly and incoherent to deliver any visceral kicks.

Half Past Dead Photos

Action hero Steven Seagal goes behind bars -- though don't worry, he isn't really a bad guy -- in this action thriller. Sascha Petrosevitch (Seagal) is an FBI agent working undercover to infiltrate a gangland kingpin's operations. While Petrosevitch is able to gain the trust of one of the gangster's lieutenants, Nick Frazier (Ja Rule), things go haywire during an FBI raid, and Petrosevitch takes several slugs in the back as he struggles to maintain his cover. Eight months later, Petrosevitch and Frazier are serving time together in the newly refurbished Alcatraz Penitentiary, as Petrosevitch secretly continues his investigation. Prison warden Hubbard (Stephen J. Cannell) is arranging for the execution of convicted killer and thief Lester (Bruce Weitz), and U.S. Supreme Court justice Jane McPherson (Linda Thorson) has announced she will attend as a witness. But Hubbard's assistant Donny (Morris Chestnut) has devised a secret plan -- it seems Lester stole and stashed away 200 million dollars in gold before he was arrested, and Donny, along with an underground SWAT team, takes control of the prison and takes Hubbard, McPherson, and the other assembled dignitaries hostage, demanding to be told where Lester has hidden his fortune. Now Petrosevitch must drop his cover and persuade his allies within the prison -- including Frazier and Little Joe (Michael "Bear" Taliferro) -- to join him in a desperate bid to foil Donny and free the hostages. Half Past Dead also features Nia Peeples, Kurupt, Tony Plana, and Claudia Christian.

Morris Chestnut
as Donny aka 49er One

Eva-Maria Schoenecker
as The Priest

Critic Reviews for Half Past Dead

A sizeable amount of the budget for this lazy film must have been spent on ammunition.

The title of this dismal action flick refers to the Seagal character's having suffered a near-death experience, though he's returned from the other side with a remarkable lack of insight.

Half Past Dead may be the year's funniest unintentional comedy for its inane plot, repetitive, unimaginative stunts and dreadful dialogue.

Sometimes, when you've just wasted a tenner and a perfectly good evening watching another dumb, gratuitously gun-filled, hackneyed, nonsensical action picture, don't you wish you were as thick, lazy and easily pleased as Hollywood wants you to be?

It's quite slick, but Seagal's fans won't necessarily get what they paid for.

Look upon his fleshy neck, his dodgy hair and his strangely puffy immobile face, ye pantywaist liberals, and tremble!

The tag line for Half Past Dead is "The good. The bad. And the deadly." They should have stuck with simply, "The Bad."

Low quality even for Seagal's standards.

I can't think of anything more cringe-inducing than Seagal saying, in a strained would-be ghetto accent, 'We aight.'

What is it about Steven Seagal and three-word movie titles?

Seagal at his most minimal, saying and doing less in this film than in practically any film he's been in. Maybe it's for the best.

... satisfies neither intellectually nor viscerally.

Audience Reviews for Half Past Dead

this was a decent watch because its seagal and im a sucker for that guy. really, this was a silly movie that shows how far seagal has fallen since he was making average movies.

Pitiful acting, even for a later Seagal flick. What happened to the action in his films, especially the actual hand-to-hand fighting? They actually made a sequel to this one and even though that one stars Bill Goldberg in it, it still can't be as bad as this piece of shit.

"The rumor is you went half past dead and came back." Let's get this out of the way: YES, Steven Seagal does break someone's neck in this film. You just knew he would.... Half Past Dead is a film that suffers from atrocious acting. Ja Rule is one of the most laughable actors in Hollywood. He's unconvincing as a hard-ass tough guy standing at a measly 5'7" 150lbs. One of the most comical attempts at a serious standoff was in the beginning of the film when Ja Rule and his gang are confronted by a single female FBI agent. What ensues is a ridiculous exchange of words that included the line "Today looks like a great day to die" and then followed by an asinine shoot off. It's a shame that this film centers around two awful actors (Ja Rule and Seagal) because the plot wasn't half bad. It was intriguing, yet predictable. Morris Chestnut makes an incredibly convincing and chilling bad guy. And Nia Pebbles looked smoking hot for a lady in her 40's. Half Past Dead has pretty spectacular action, full of gun fights and martial arts. But overall, it's just a really really lame flick. With better leads than an overrated rapper and a fat black belt fighter, this could've been a good popcorn flick.

I always enjoyed Seagals abilitys in Martial-arts more then acting, as well as Ja Rules ability too rap over acting - but other then that, it wasnt TOO bad. It's worth seeing, and maybe even buying - but, not a favorite.

Half Past Dead Quotes