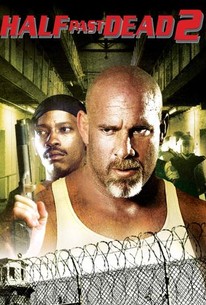 Half Past Dead 2 Photos

When a large-scale prison riot erupts and the man responsible for the chaos kidnaps the wife and daughter of a violent offender, the hardened inmate realizes that in order to save his family he have to form an unbreakable alliance with a fellow prisoner. The most feared prisoners in the cellblock have taken over the institution, and the man pulling the strings has kidnapped the only people who ever mattered to Burk (Goldberg). Now, in order to ensure that no harm comes to his family, Burk will join forces with fellow prisoner Twitch (Kurupt) to stage a daring escape and knock down anyone or anything that stands in their way.

Critic Reviews for Half Past Dead 2

There are no critic reviews yet for Half Past Dead 2. Keep checking Rotten Tomatoes for updates!

Audience Reviews for Half Past Dead 2

Dull action in the prison as well as wrestler Bill Goldberg is average than Steven Seagal who appeared in the first one.

Half Past Dead 2 Quotes