Halloween III: Season of the Witch1982 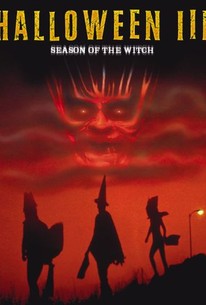 In the third Halloween feature--which really has little connection to the previous two--the psychotic killer is a scientist (Dan O'Herlihy) who creates a brand of satanic Halloween masks which kill the children who wear them.

Michael Greene
as Technician
View All

News & Interviews for Halloween III: Season of the Witch

View All Halloween III: Season of the Witch News

Critic Reviews for Halloween III: Season of the Witch

Absolutely atrocious. I admire the fact that they did try to propel the story in a different direction. But the story they chose was insanely boring.

This movie is a dirty trick on all Halloween fans.

The end result is a bit of a mess but hugely enjoyable, and often (thanks to Dean Cundey's camerawork and John Carpenter's close supervision as producer) as striking visually as its predecessors.

This is one of those Identikit movies, assembled out of familiar parts from other, better movies.

Mr. Wallace clearly has a fondness for the cliches he is parodying and he does it with style.

Halloween III: Season of the Witch is a horror movie worth discovering, revisiting, and most importantly experiencing.

Expectations or not, it's just not very good. No wonder Michael Myers came back. At least that vapid presence was scary.

A goofy premise, but its distinctly 80s mix of sci-fi and horror works surprisingly well meshing perfectly with the Halloween theme.

Halloween III cynically critiques consumerism all while tethering itself to a brand name in the craven pursuit of more money.

Halloween III: Season of the Witch, no matter how different and unexpected and strange it was (and precisely for those reasons), came as a blessed relief.

It's a movie about the widespread death and destruction via techno-magic and it's just a huge disappointment that it took years after its initial release for Halloween III to find an audience.

Audience Reviews for Halloween III: Season of the Witch

A mediocre movie that feels more like an episode of an anthology series stretched for 98 minutes (with shades of Invasion of the Body Snatchers and even James Bond), and it takes too long to gain momentum and move into high gear to make us care about its stupid plot.

Ah, Halloween III: the black sheep of the series. This one gets ignored and dumped on since it strays from the others and has nothing to do with the rest of the series. For the longest time I vowed to never see this, simply for that reason. However, as time went on, I gave it some thought, and decided to reconsider upon learning that, from the start, John Carpenter had envisioned an anthology where, each subsequent film in the series (save for part 2) was unrelated, save for taking place on/around and involving Halloween. Think of the possibilities. They're basically limitless. Unfortunately most people didn't seem to get that, weren't happy about it, confused as to why this one deviated, and eventually forced the rest of the films to bring back Michael and stick to formula. That kind of thinking is rather unfortunate, and I feel bad for being so narrow minded, especially when I learned about Carpenter's intentions. Okay, enough with the backstory. Our plot concerns a doctor who, along with the daughter of a recently deceased patient, get caught up in a malevolent conspiracy involving the founder of a Halloween mask manufacturer who wants to return the holiday to its ancient, sacrificial origins. It sounds nuts, I know, and the specifics are even weirder, but this actually shows a bit of thought and uniqueness, despite not making a lot of sense. Tom Atkins is okay as the doc, and Stacey Nelkin is passable as the daughter, but the one who steals the show is Dan O'Herlihy as the head of the mask company. He's creepy, unnerving, and absolutely nuts. It made me even happier when I soon realized that he's also the same guy who played the CEO of OCP in Robocop. Sweet. The film's got a dark, moody tone that's really comparable to the previous two films, and a lot of that is thanks in part to Alan Howarth and John Carpenter's score, which is really eerie, atmospheric, and unsettling, establishing the perfect mood and tone. The cinematography by Dean Cundey is also quite good. The plot is off the wall, but there's some decent effects, and the fact that the filmmakers wanted to be risky and make the primary intended victims is commendable. I don't condone violence towards kids, but I do applaud balsiness. The film does have a lot of issues with story and some of the acting, and it does start to fall apart towards the end, but I do give it credit for having some neat ideas and doing something different. This really isn't THAT terrible of a film, and it's unfortunate that it's so underrated. If you have an open mind, you might want to give it a chance.

Androids, the mystical powers of Stonehenge, rattlesnakes and magical Shamrock coins are all enveloped into one conspiracy theory. What might sound like a bizarrely exhilarating rollercoaster is actually a laughable, groan-inducing shadow of Carpenter's talents. It possesses the incontrovertible trademarks of Carpenter: the priceless keyboard score, the sparse style and Dean Cundey's legendary cinematography. However, none of the characters are remotely sympathetic (Atkins is essentially a lecherous gigolo who flirts with every ample-bodied female), the gore is wildly overcooked (a beheading and nostril dislocation) and the bombarding, annoying theme song is repeated ad nauseum. When the protagonists are hiding behind a mask rack, it's like a scene directly from a 'Scooby-Doo' episode. I was never an overwhelming fan of the franchise, but this disconnected sequel is among the most taxing to watch, let alone enjoy.

Season of the Witch is a drastic departure for the Halloween series. The film is significant for the fact that the film has the absence of Michael Myers, which was this films death rattle. The film would've been better as totally new horror film that wasn't part of the Halloween saga. This film was a disappointment and is certainly one of the worst and weakest of the series, along with Halloween: Resurrection. The film would have been something good if it wasn't part of the Halloween franchise. However it's part of the franchise, and the result is a poor third entry with not so great performance, a poorly developed plot and the absence of Michael Myers. Every film maker feels compelled to do something different with a franchise no matter what the genre is. In Horror, something different can be a BIG risk taker, the film can either work or not. Let's take Halloween III Season of the Witch for instance. The film makers decided to omit Michael Myers al together from this film, and start a new. The film is a big mistake, and is one of the worst ever made in the series. I can at least respect the idea, but the absence of Michael Myers is inexcusable. He is the one that makes the series what it is, it be like removing Leatherface from the TCM series. The film is an utter failure and the worst in the series.