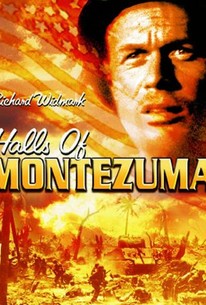 In Halls of Montezuma, Richard Widmark stars as Lt. Carl Anderson, a former schoolteacher who serves as a no-nonsense Marine officer during WW II. Anderson leads his patrol to a Japanese-controlled island, where the enemy has set up an experimental rocket base. The patrol's mission is to capture prisoners for interrogation, which proves a near-insurmountable task given the fact that the Americans are heavily outnumbered. Among the grime-covered Marines are Walter (Jack) Palance, Robert Wagner, Karl Malden, Richard Boone, Skip Homeier and Neville Brand. Jack Webb is a chain-smoking war correspondent, while Reginald Gardiner shows up as an aristocratic--but very tough--British officer. ~ Hal Erickson, Rovi

Critic Reviews for Halls of Montezuma

Like many other war films, it is the story of a small fighting unit in action. But unlike most of the others, the characters are sharply defined and well-acted.

Lewis Milestone's direction is highly competent, and he has a fine cast, including Richard Widmark.

How can flag waving, the Marines, and Richard Widmark go wrong?

Although the movie grinds down to a snail's pace on occasion, there's more than enough patriotic gunplay for a WWII buff to get behind.

I thought of maverick Samuel Fuller and his no-nonsense 'tabloid' approach to cinema.

The film doesn't pretend to be more than a routine WW11 war film reflecting the political mood of when it was made.

Audience Reviews for Halls of Montezuma

Halls of Montezuma is one of the classic war films. Brilliantly acted and directed, this is a must see movie for War film enthusiasts. Director Lewis Milestone crafts a near flawless film that delivers effective thrills. I thought that the film had a well written script that elevated the film's plot. The action sequences were elaborate and exciting. This is a very good film to watch when you have nothing else better to watch, and it is a genre classic despite its flaws. The acting here is quite impressive, and considering that this was made in the 1950's, the film looks good and offers viewers a taste of the chaos of the Pacific Theatre of combat. I personally enjoyed the film and thought it was a among the best War film that I've seen. Halls of Montezuma is not the greatest war film ever made, but it is nonetheless a standout feature worth seeing. The cast itself are wonderful, and they elevate the film's prestige significantly. If you happen to catch this one on TV, by all means watch it. The film is entertaining from start to finish, and it is one of the earlier attempts to capture the chaos of the Second World War on film. If you love these types of films, then check this one out, it may be imperfect in some areas, but it is a picture that is directed by a director who knows how to bring an engaging story to the screen. Genre fans will surely enjoy the film like I did. Halls of Montezuma is an accomplished picture that stills holds up to this day.

Remember when Hollywood depicted war as glorious and romantic? This is Richard Widmark storming the beaches of pacific islands, taking out Jap pillboxes with a machine gun in one hand and a pistol in the other. This is navy corpsman Karl Malden patching up wounded comrades and private Jack Palance lobbing grenades from a foxhole. This isn't just a post-WWII action film, it's a God damned two hour recruiting poster!

Lewis Milestone made some great war films, but this WWII drama about a marine platoon commanded by Richard Widmark doesn't measure up to his best. The action is all smoke and noise, with little pause for any character development and the supporting cast overact their badly melodramatic, overly stereotypical roles to a rather cringeworthy degree (Jack Palance's performance in Batman is comparatively understated compared to this!) The technique of using flashbacks to contrast the soldier's pre-war lives is also clumsy, and Widmark too often looks more like a social worker dishing out Werther's originals than a battle hardened lieutenant. The lack of humanity in the script is highlighted particularly in a scene where a tank sprays napalm on Japanese positions with no thought or mention of it's victims, as the marines look on cheerfully as if they're watching a sunday afternoon barbecue. It does have moments; particularly in the scenes involving the Japanese prisoners, but as a whole it's too simplistic and cliched.