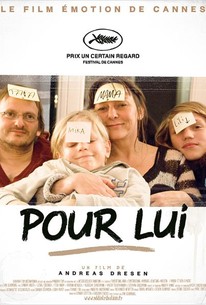 A middle-aged man is abruptly forced to confront his own mortality in this drama from German filmmaker Andreas Dresen. Frank (Milan Peschel) is a forty-year-old working-class guy who has just moved into a new home with his wife Simone (Steffi Kuehnert), their teenage daughter Lila (Talisa Lilli Lemke), and eight-year-old son Mika (Mika Nilson Seidel). All seems well in Frank's life until he visits his doctor and receives some highly unexpected news -- he's been diagnosed with an inoperable brain tumor, and has no more than a few months to live. Frank is puzzled and isn't sure how to react to this news, while Simone is emotionally devastated, and they initially choose not to tell the children, leaving Lila and Mika embarrassed and puzzled at their father's sudden and dramatic mood swings. In time, Frank tells the children his secret, and over the next few months he and his family struggle as cancer takes its toll on his body and his mind. Halt Auf Freier Strecke (aka Stopped On Track) was filmed without a complete shooting script; director Dresen and writer Cooky Ziesche created an outline for the entire film, and then allowed his actors to improvise their dialogue to give the scenes a greater sense of naturalism. In addition, the doctors and nurses who appear in the film are real-life health care workers playing themselves.

Deserves to win the majority of plaudits thanks to some stellar performances, most notably Milan Peschel as terminally ill, 40-year-old father of two Frank Lange.

There are no featured reviews for Halt Auf Freier Strecke at this time.