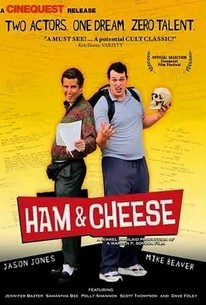 Persistence makes up where talent is lacking as two aspiring actors cling to the elusive dream of stardom despite receiving little encouragement and precious few callbacks. The world of showbiz can be a cruel one, especially when you're an actor with no clue about your lack of talent. Richard and Barry are two such actors, yet despite the fact that there isn't a single ounce of onscreen charisma between them, their persistence is what keeps them going. But how much humiliation can an aspiring actor endure before they finally call it quits? As Richard and Barry endure humiliating auditions, calamitous television shoots, and embarrassing stints as animal mascots, the answer to that pressing question finally may be closer than either had hoped. ~ Jason Buchanan, Rovi

There are no critic reviews yet for Ham & Cheese. Keep checking Rotten Tomatoes for updates!

There are no featured reviews for Ham & Cheese at this time.