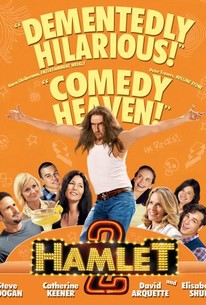 Steve Coogan stars in the comedy Hamlet 2, which follows a drama teacher who tries to put together a production of "Hamlet 2" to rescue his high-school theater department. Catherine Keener co-stars in the Andrew Fleming-helmed production.

Elisabeth Shue
as Herself

Evan Adrian
as Danny the Waiter

J.D. Garfield
as Man With Envelope

Mike Hatfield
as Man In Truck

Will Gluck
as Man at Play #1

Tom Romero
as Man at Play #2

Daniel Quinines
as Giggles
View All

For anyone who ever took drama in High School, Coogan's character will surely ignite memories of quirky, even downright crazy teachers you may have encountered over the years.

A high school musical that would make John Waters proud.

Not since Death of a Salesman has failure been quite so entertaining.

Dysfunction and eccentricity are the fuel for this funny experiment.

To laugh or not to laugh - that is the question. And with Hamlet 2, there is most definitely only one answer - laugh laugh laugh!!!! Wildly inventive, irreverent and beyond entertaining...

The film wants to be an edgy indie-comedy, but proves to be nothing more than a middle of the road picture with more misses than hits.

We are never entirely sure what the hell happens, only that Hamlet is given a chance to set everything right. And that a lot of it is set to New Wave.

Despite a few smiles, "Hamlet 2" is a slow slog to the final curtain.

Pretty stupid, but okay for something light. Few laughs among the bad taste.

I went into this not expecting much... I was delightfully wrong. This film is outrageous enought to be funny and not too crude to be overly offensive. Steve Coogan plays a great part that I enjoyed. The wimp teacher turned bool guy. The young actors in this are really good as well.

A failed-actor-turned-drama-teacher attempts to save his high school's drama program by putting on an original work called Hamlet 2. This film is goofy as shit. There's no other way to describe Steve Coogan's performance or the premise as a whole. The film constantly puts Coogan's character up for ridicule, and Coogan commits wholeheartedly to each wacky moment. And who would've thought that David Arquette could play the "strong" silent type? I've often wondered if a film about a character who has lost himself in movies would work, and in Hamlet 2 it does only to the extent of screwball comedy. There is little in the way of dramatic tension, and I think your enjoyment of the film depends on your tolerance for goofiness. If nothing else, it's impossible to resist playing the sing-along version of "Rock Me Sexy Jesus" one more time.

I love Steve Coogan, but he can't carry this film. His performance is all over the place, and though he might hit the right notes for each scene, his character is wildly inconsistent. I love Catherine Keener, but I'm really tired of her playing the same, mailed-in, unhappily married/divorced person every time out (40-Year-Old Virgin; Synecdoche, New York; Cyrus, etc.). And I don't hate awkward humour. When done right, as it occasionally is in Hamlet 2, I actually find it quite funny. So - what the hell happened? This film is clunky and difficult and very hard to watch, painfully unfunny in places, but producing just enough laughs that you can't turn it off. Or maybe you can. Part of me would say, actually, that you should. I had to take a break and return for the ending a day later, and really, it wasn't worth finishing. The last line was interesting, though, given when I watched it (Jan 10-17, 2010): "No matter where you, it's always going to be better than Tuscon." I blame Sarah Palin. Yuk yuk yuk. From the co-writer of South Park and Team America. NOTE: Not Matt Stone. Not Trey Parker. Pam Brady. Who? Exactly. Flashes of hope in this film, but ultimately, a huge letdown. I was pulling for a cult classic but this one just didn't deliver. PS: David Arquette? Really? The eventual reason for his "just standing there" performance is evident from the beginning. Easiest. Paycheque. Ever.