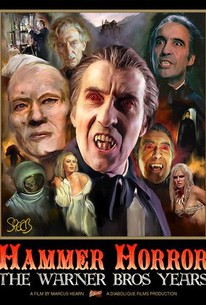 The classic Hammer films from Warner Bros are now appearing on Blu-ray. However, they have never received an in-depth exploration in any special feature or documentary. Now, the fascinating story is finally told in this unprecedented 101-minute documentary feature, HAMMER HORROR: THE WARNER BROS YEARS, written and directed by Marcus Hearn, Hammer Films' official historian. The documentary features exclusive interviews with some of the key players from that period, as well as authors and historians like Sir Christopher Frayling and Jonathan Rigby. Also included are rare production stills, previously unseen film footage, Hammer's original shooting locations, and access to previously unpublished archive documents.

A lovely examination of one of Britain's best film institutions, prepare to learn a whole lot more about the world of Hammer Horror. A must devour for fans of the House.

Hammer Horror: The Warner Bros Years is a nice piece as far as it goes, though as it's about curiosities that only the most die-hard fans will have seen, it feels like it should be a special feature on a comprehensive DVD box set rather than a standalone.

Marcus Hearn's documentary Hammer Horror: The Warner Bros Years covers this rapidly evolving climate, and is as much elegy for as celebration of the Hammer style and spirit.

There are no featured reviews for Hammer Horror: The Warner Bros Years at this time.