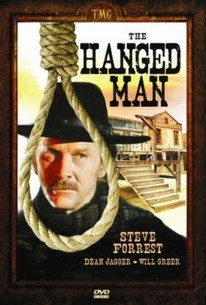 Steve Forrest, in his last starring role before moving permanently to series television with S.W.A.T., plays James Devlin, a once-notorious gunman who is wrongfully convicted of murder and sentenced to death. Through an accident -- though the priest Father Alvaro (Rafael Campos) insists it was divine intervention -- he survives the hanging, barely, and is set free, a death certificate having been duly and lawfully issued by the doctor (William Bryant) who examined the "body." A near walking corpse, with an odd, dark fire in his eyes and a strangely low body temperature and heartbeat, Devlin doesn't know what to do with the rest of his life, however long that may be -- he's got enemies still walking around who would like to finish the job, and neither the doctor nor the priest can tell him how long he might live. Having already reformed before he was convicted, he goes the rest of the way and decides to spend what time he's been given, and use the skills he still has as a gunman and soldier of fortune, on the side of the angels, helping people who need it. He quickly finds himself up to his neck in a deadly land war between an ambitious mining tycoon (Cameron Mitchell) and a young widow (Sharon Acker) for the property she owns.

Will Geer
as Nameless

Critic Reviews for The Hanged Man

There are no critic reviews yet for The Hanged Man. Keep checking Rotten Tomatoes for updates!

Audience Reviews for The Hanged Man

There are no featured audience reviews yet. Click the link below to see what others say about The Hanged Man!