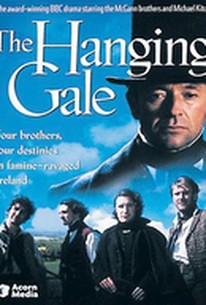 The four-part BBC1 miniseries The Hanging Gale was set in 1846, the year of the Irish potato famine. As starvation stared them in the face, a group of farming families banded together to survive. Among these hardy souls were the Phelan Brothers (played by the real-life McGann brothers), who struggled to save their family farm despite the persecution of a cruel British land agent. Filmed on-location in Ireland, The Hanging Gale was initially telecast from May 14 to June 4, 1995. ~ Hal Erickson, Rovi

There are no critic reviews yet for Hanging Gale. Keep checking Rotten Tomatoes for updates!

There are no featured audience reviews yet. Click the link below to see what others say about Hanging Gale!